Advertisement
The Newspaper for the Future of Miami
Connect with us:
Front Page » Real Estate » Miami Worldcenter residences plan more parking for bikes than cars 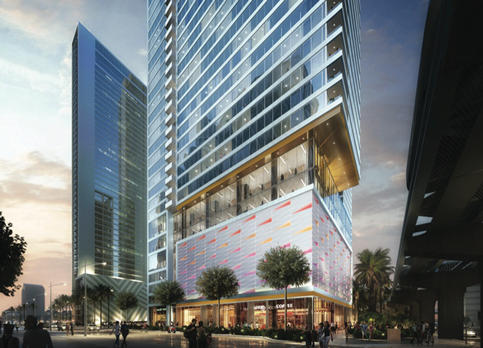 The developer of a major mixed-use residential project within Miami Worldcenter plans a building with more parking spaces for bicycles than for cars.

So it may be no surprise that the site abuts a Metromover station.

Akara Partners, a Chicago-based real estate investment and development company, is proposing the project in the multi-block Worldcenter development, rising in the Park West neighborhood.

AP MWC Property Owner LLC is the applicant for the warrant to allow a new building in the Miami Worldcenter Special Area Plan.

The project is called Kenect Miami, and the first phase is targeted for the eastern approximately one-third of 1016 NE Second Ave.

The first phase will include about 436,258 square feet of floor area in a 39-story tower, 450 residential units, 251 parking spaces for motor vehicles, and enough racks to park 728 bikes.

The developer’s team made a presentation to the city’s Urban Development Review Board on July 17, garnering favorable comments.

The board approved a motion recommending approval of the project on a 4-to-1 vote.

Anthony Tzamtzis voted ‘no.’ He had voiced concern about the amount of parking, and he wanted to see a layout or floor plan for the residential units, which he said was not provided.

The first building is part of what’s being called a multiple-phase project on property west of Northeast Second Avenue between Northeast 10th and 11th streets. The Eleventh Street Metromover Station is immediately to the east.

Attorney Melissa Tapanes Llahues, representing the applicant, said they are excited about the project as it will bring some life to that corner and serve as “a gateway” to Miami Worldcenter.

“The project is designed to feature relatively smaller units with generous amenity areas and shared spaces, with a focus on affordability,” Ms. Llahues wrote in a letter to the city.

“The Project is in line with the Miami Worldcenter vision of higher density, urban development which features unique and sophisticated architectural design,” she wrote.

The project provides more open space than is required by the Miami 21 zoning ordinance and those open areas, including the space around the Metromover station, will feature inviting landscaping and hardscaping, she said.

“Further, the applicant has worked with staff to improve the project’s design and configuration, including limiting parking and service access to only NE 11 Street. This significant modification to the project allows greater pedestrian interaction with the project and improved pedestrian connectivity around the project.

“The project embraces the Miami Worldcenter emphasis on walkability within the area and will encourage transit ridership by improving the experience of accessing the Eleventh Street Metromover Station,” wrote Ms. Llahues.

David Earnhart, vice president of design and construction at Akara Partners, said the Kenect project is an outgrowth of trends in real estate and the millennial demographic.

Studies are showing that millennials are drawn to urban core living, he said.

“We find millennials like walkable developments, being close to dining, employment and entertainment opportunities… They value intangible things. They like having intangible experiences more than they collect stuff,” he told the board.

Design of apartment buildings focuses on shared space and amenities, and millennials develop a sense of ownership from the sharing, he said.

Burdened with a high level of student debt, many millennials can’t afford or chose not to purchase a home, Mr. Earnhart said.

Todd Snapp, principal at architectural firm Perkins+Will, showed images of the project including a two-story amenity deck above the parking deck, and a two-story ground floor.

The building is designed to encourage pedestrian activity, he said. Only half of the residential units have balconies.

The roof terrace is to have a small lounge area.

The east elevation is to have a large art wall, and the parking deck or garage will have a metal façade and be mechanically ventilated, said Mr. Snapp.

Phase 1 and prior phases on the site will share a curb cut, he noted.

Board member Neil Hall was impressed by the developer’s examination of the market trends relative to the desires of millennials.

“Hearing of how they live and think is very interesting. It’s very important to analyze the new generation,” he said.

But he asked if the developer had any concerns about the market changing, asking: “they only want to spend money on actives and not on space? Are the units all rental?”

A member of the developer’s team said yes.

“We’re less concerned with 20 years out,” said Mr. Earnhart, who said millennials today want to be in the urban core.

The project site is also close to Miami Dade College’s downtown campus, the board was told.

Mr. Hall said he appreciated the project having affordable units but he’s worried about rising rents in 10 years, asking “can you maintain that affordability?”

Mr. Hall concluded that he likes the design aesthetic of the building.

“Great job on the design,” said board member Ignacio Permuy. “It is a very good fit for this area. The program design is simplistic but is very elegant.”

Chairman Gerald Marston asked about the size of the apartments.

Mr. Earnhart said the residential units will each have a fully-functional kitchen and be self-contained.

Mr. Marston mentioned projects these days are being designed and built with little to no parking.

“We worry about parking,” said Mr. Earnhart. “…we take great care. We try to be consistent in our plan and spend a great amount of time on our structural grid.”