Advertisement
The Newspaper for the Future of Miami
Connect with us:
Front Page » Business & Finance » Miami explores leasing Allapattah land to Major project 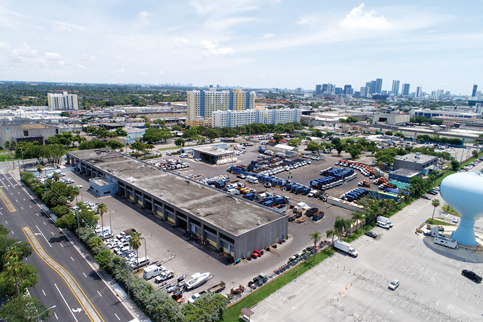 A request for information has been issued on behalf of the City of Miami for about 18 acres of city-owned land in Allapattah as the city considers leasing the property.

The two square blocks are between Northwest 19th and 20th streets and Northwest 12th and 14th avenues, north of Jackson Memorial and the Veterans Administration hospitals.

Andrew Schimmel, project lead from the city’s real estate and asset management department, said the prospect of leasing the land is still in early stages, with various possibilities available for the land. Responses to the request for information are due Aug. 12.

“The purpose of the RFI is to gauge from the development community what the best path forward might be,” Mr. Schimmel said.

He said that if responses to the request for information indicate market interest, the city might take the next step of requesting proposals. He also acknowledged an increase in business interest in the neighborhood

For the site, as is the case with other city-owned property, Mr. Schimmel said the city strives to meet three criteria when considering leasing its land: if it would meet public policy goals, such as more affordable housing; if it will increase city revenue; and if it could increase financial gains on city-owned land while still retaining the property.

Currently on the property are the city’s General Services Administration and operations of the solid waste, parks and recreation and public works departments, as well as a fire station.

“There is a possibility that all these departments get consolidated and less than the 18 acres are used for these five departments,” he said, indicating one of the several paths that could result were the property to be leased.

The city selected real estate firm CBRE as the agent to market the site, with Mr. Schimmel saying that the city has turned to CBRE before because the firm has national and international reach. He added that if the city does end up requesting proposals, CBRE would receive a service fee.

In a press release, CBRE First Vice President in Florida Chris Wood said, “The City of Miami recognizes the market demand in Allapattah and is looking to attract a qualified investor/developer to this unique site with significant acreage and monetize this city owned asset via a long-term ground lease.”

Back in April, the city commission approved a nearby mixed-use project that will bring apartments, offices, urban farming, a school and more to a property of more than 8 acres, bounded by Northwest 21st and 22nd streets and Northwest 12th and 13th avenues.