Advertisement
The Newspaper for the Future of Miami
Connect with us:
Front Page » Business & Finance » Miami Beach Canopy to mark city’s entrance 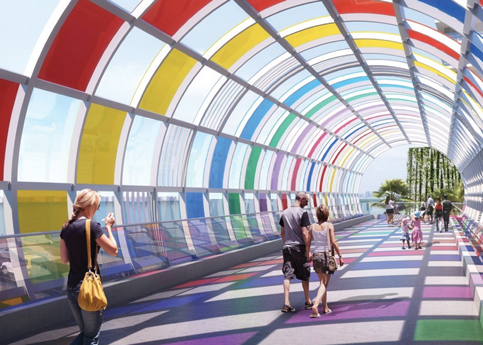 The Miami Beach Canopy, French artist Daniel Buren’s latest work, has won unanimous approval from City of Miami Beach commissioners. The transparent cylinder pedestrian bridge and gateway off the MacArthur Causeway is lined with curved glass panels that, when hit by sunlight, will allow pedestrians to walk on color.

The Miami Beach Canopy or the Pedestrian Bridge Project is one component of the changes coming between the 500 to 700 blocks of Alton Road. David Martin’s Terra Group and Russell Galbut’s Crescent Heights united for the Park on Fifth project on 600 Alton Road. A 44-floor residential tower, commercial space with room for retail and a restaurant, and a park will sit behind Bentley Bay Condominiums at 520 West Ave. and the Floridian at 650 West Ave. Terra Group and Crescent Heights promised to deliver the Miami Beach Canopy when commissioners blessed the Park on Fifth project. Arquitectonica, hired by the partnership, leads design efforts for the façade.

Commissioners decide in favor of the exterior concept connecting Fifth Street and West Avenue during the second reading for the design plans last week. The Miami Beach Canopy will allow residents and visitors to circumnavigate most of the city on foot from Lincoln Road to South Pointe.
The structure of the project, approved by the Florida Department of Transportation (FDOT), does not change. The bridge remains at 290 feet in height and offers a switchback staircase with a bike rail and spacious elevator. The project also connects to the park coming to 600 Alton.

The Miami Beach Canopy, titled by Mr. Buren, beats the prior concepts criticized by commissioners and disapproved by FDOT. A series of curved glass panels cover the entire bridge. Above the base, where colored and clear glass decorate the bridge, is a pattern of more colored glass and voids.
The openings in the ceiling will allow for breezes to ventilate the tube. Either end of the bridge looks across the north and south, exposing views of the northern bay walk and southern bay walk.

Florida’s abundance of sunlight inspired Mr. Buren’s canopy. His design allows nature to play a role in illuminating the transparent cylinder and helping cast shadows of color across the walkway and in the street below.

The concept accommodates any future mass transit solution the city may choose and the herds of residents and travelers that frequent the causeway, commissioners were told.

Developers pride themselves in choosing Mr. Buren to capture the city’s identity and commitment to art. Mr. Buren’s work satisfies commissioners’ craving for an artistic design and checks off Department of Transportation requirements.

“What is interesting about this bridge is that it meets the exact DOT criteria,” Mr. Martin said. “The artist grabbed a detail from a standard booklet we issued them and basically designed utilizing that booklet, which is something I was a little nervous about and concerned about how crazy something could have been done.”

Mr. Buren, who has visited Miami several times, is familiar with the location of the bridge. He said of his designs in a video that developers played for commissioners last week, “My work has to do with place, where it is going to be seen. The work has to fit in a very smooth way.”

The city will welcome residents and visitors with the work of a world-renown artist. Mr. Buren is the creative mind behind highly recognizable artistic productions across the globe. His projects include the 260 black and white marble pillars in the Parisian courtyard of the Palais Royal dating to 1986, the Eye of the Storm at the Guggenheim Museum in 2005, the colorful patterning of Nuremberg’s Neues Museum in 2009, and – most recently in 2016 – the observatory of light at the Louis Vuitton Foundation in Paris.

Architect and chief curator for Arquitectonica Terence Riley said of the Miami Beach Canopy, “Buren transforms the space using the simplest forms – color and pattern. In this sense, the work is truly universal. You don’t need to be in the art world, know the history of art, you don’t have to be an expert, you don’t even have to speak French.”

The concept is approved, but some final details remain to be ironed out. The city administration seeks to continue discussion in the July 31 commission meeting. Matters to be discussed include the $10 million budget shrinking to $9,250,000, a separate owner’s contingency of $360,000 resting on the table, and City Manager Jimmy Morales’s right to execute permit applications with regulatory agencies with jurisdiction over the project. Mayor Dan Gelber and the city clerk are also authorized to execute the amendment to the agreement.

Arquitectonica is to return to the city commission in September with additional design details for Mr. Buren’s vision. Architects focus on lighting the bridge in the evening with LED lighting to allow the glass panels to cast colorful shadows in the evening.