Advertisement
The Newspaper for the Future of Miami
Connect with us:
Front Page » Government » Army trims PortMiami dredging plans 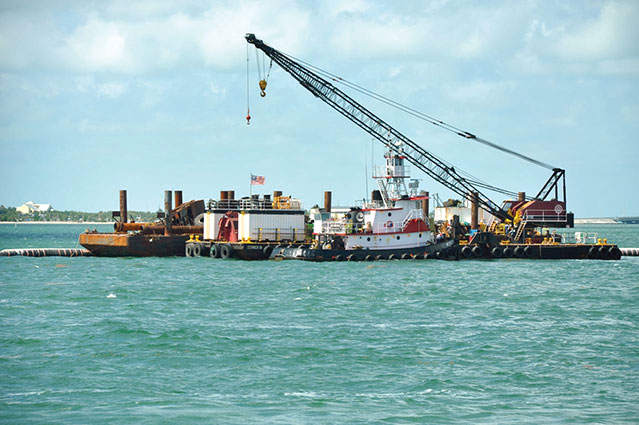 The US Army Corps of Engineers’ next round of dredging at PortMiami now has a tighter focus, as survey results of existing conditions and current needs at the port found that only its inner cuts needs dredging.

“The maintenance event is expected to include the inner harbor cuts, and associated National Environment Policy Act documentation is expected to take into account new available information relevant to efforts associated with dredging the outer channel, including recent sediment tracer analyses conducted in the area,” the release said. “Because the current maintenance event only addresses the inner channel cuts, the scope of work avoids dredging within 1,000 feet of the outer channel, minimizing potential adverse effects to corals and hardbottom habitats to the maximum extent practicable.”

That “new available information” includes a May report cited in the Corps’ assessment titled “Extensive coral mortality and critical habitat loss following dredging and their association with remotely-sensed sediment plumes.”

The report, published in “Marine Pollution Bulletin,” estimates more than 500,000 corals were killed within 0.3 miles of PortMiami as a result of dredging there from 2013 to 2015.

Researchers found evidence that dredging sediment buried up to 90% of nearby coral reefs, resulting in extensive coral death, and dredging impacts may have spread to 15.5 miles of Florida’s reef tract.

The Corps’ “preferred alternative” to maintain current operations and maintenance levels includes dredging about 100,000 cubic yards from the inner harbor, with dredged materials to be disposed of offshore from PortMiami at the Miami Ocean Dredged Material Disposal Site.

Despite $205.6 million in harbor improvements between 2013 and 2015, Port Director Juan Kuryla in March 2018 requested a new study of upgrades to accommodate bigger ships.