Advertisement
The Newspaper for the Future of Miami
Connect with us:
Front Page » Profile » Jorge Pérez: Condo king transferring control of his Related Group 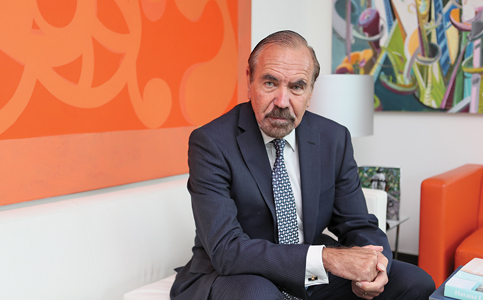 Jorge Pérez likes to lead by example. “My management style is, ‘Follow me,’” said the reigning condo king of Miami whose real estate firm, The Related Group, has by his estimation built more than 100,000 condo units cumulatively valued at about $50 billion throughout the nation and across the globe.

His competitive spirit, he said, is based on the “immigrant mentality” that everything can be lost at any moment – a personal and professional principle he gleaned witnessing his family struggle as exiles after Fidel Castro’s regime nationalized his father’s business 60 years ago.

“Everybody who’s been with me knows I work harder than anybody else,” he said. “Our [company DNA] is very driven.”

This year marks the company’s 40th anniversary. While Mr. Pérez remains at its helm, he is steadily transferring daily control to two of his sons and grooming a third for the future. And where before business consumed nearly all his working hours, half is now dedicated to giving back through the company’s and his family’s philanthropic efforts.

“I hope I never accomplish everything I hope to because that’s what keeps you going every day – that desire to do better and contribute more,” said the namesake for the Pérez Art Museum Miami and Jorge M. Pérez Architecture Center at the University of Miami, among other local institutions. “From a philanthropic point of view, I don’t think I’ve even touched the surface of what we want to do.”