Advertisement
The Newspaper for the Future of Miami
Connect with us:
Front Page » Top Stories » Miami-Dade courthouse to cost $1.2 billion on arsenic-laced site 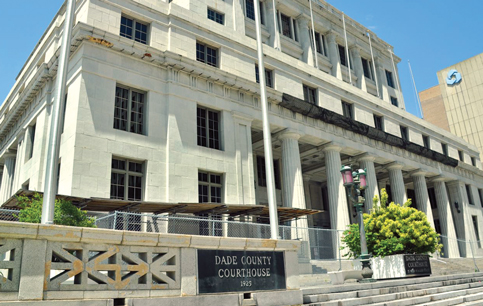 Furthermore, the $1.2 billion estimate doesn’t include environmental costs – and he said that a new assessment report shows soil and groundwater contamination from arsenic on the downtown Miami construction site, which the Florida East Coast Railway once used.

For perspective, $1.2 billion is 40% to 50% of the cost of the Marlins Park baseball stadium that the county approved a decade ago. Environmental costs could increase the percentage.

The new courthouse would be on Flagler Street just west of the current 91-year-old Dade County Courthouse, still used but labeled woefully inadequate and in need of constant repairs just to keep its doors open. Occupants complain of internal water damage as well as mold and mildew. Efforts to replace the building have taken more than a decade.

Three potential private partners are negotiating to build the courthouse and talks have “yielded some savings to the county,” Mayor Giménez said in his memo to commissioners. “The final project cost will be reported… as part of the award recommendations in November.”

The county estimates it will have $38 million a year available for 30 years to pay for the courthouse, subject to annual escalations, the mayor’s memo said. “This amount excludes an annual lease payment that must be made to the Department of Transportation and Public Works for the use of the project site,” he wrote. The first payment would probably come in fiscal 2023-24, he wrote.

While a hired consultant says the county will save over time by handling the project as a public-private partnership, the mayor told commissioners, the “payment obligations represent a substantial, long-term funding commitment for the county.”

Either the county must increase general funds available, the mayor indicated, or be prepared to cut the services of those departments to “fulfill the county’s future financial obligations to the courthouse project.”

The project remains on schedule, the mayor wrote, which would lead to a construction start next July, “contingent on ongoing environmental test results.”

Because of the contamination, the mayor said, the county will require whatever developer it chooses to protect public health and worker safety in construction.

But the contamination, he wrote, “will not impact the county’s ability to move forward with construction.”

4 Responses to Miami-Dade courthouse to cost $1.2 billion on arsenic-laced site