Advertisement
The Newspaper for the Future of Miami
Connect with us:
Front Page » Communities » Lincoln Road blanketed with 500 native orchids 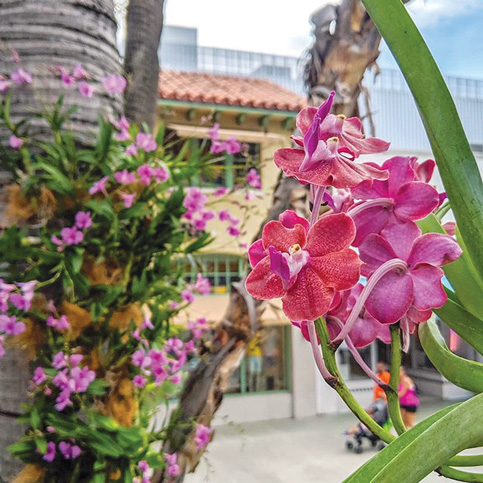 Walking on Miami Beach this summer can be even more mesmerizing than usual. Since Tuesday morning a block of Lincoln Road has been blanketed with 500 native orchids, planted among the palms and hardwood trees.

Over eight species of the vibrant plant were donated to the City of Miami Beach by Terranova, one of South Florida’s leading real estate firms, contributing to the city’s goal to plant a total of 20,000 native orchids throughout the urban island.

“The fact that we make something beautiful and exciting that our residents and visitors will like, while at the same time doing good to the environment, is just an incredible opportunity for all of us,” said Stephen Bittel, Terranova’s chairman.

The orchid seeds were provided by Fairchild Tropical Botanic Garden and are varieties that the garden grows as part of its Million Orchid Project, a five-year orchid reintroduction program into South Florida’s urban landscapes.

“The plants that we put out for Terranova are of Caribbean origin, big, flowery and showy,” said Jason Downing, orchid biologist and researcher at Fairchild. “These were grown by our partner Dr. Martin Motes, a renown local orchid grower that has been our partner for many years.”

The company is planning to plant another cluster of 500 orchids within the next 30 days on the same block of Lincoln Road, between Meridian and Jefferson avenues.

The city is contributing to Fairchild’s mission by planning to plant a total of 20,000 native orchids, although the city’s effort is independent of the Million Orchid Project. Terranova’s Lincoln Road initiative is also independent of Fairchild’s goal, which does not take the Beach planting numbers into consideration, and was spearheaded by local business owners.

More than a century ago, South Florida was a natural orchid paradise, but the flower’s population dwindled rapidly to catastrophically low levels in the late 1800s. Today, native orchids exist in such small numbers that they have no hope of recovering on their own, so Fairchild uses micro-propagation laboratory techniques to create suitable growing conditions for a handful of Florida orchid species to propagate and be reintroduces into natural areas.

Lincoln Road was selected because there’s direct sunlight and salt air, which is ideal for the growing of orchids, but also because Terranova is a significant investor in Lincoln Road, one of the busiest streets in South Florida with about 13 million pedestrians a year.

Mr. Bittel said his company has committed to the city that it will cover the maintenance cost of the orchids for one year. “After that, our goal is to sign a landscape contract with the city on how to take care of them,” said Mr. Bittel, whose name will be affixed to the new species planted on Lincoln Road.

Terranova’s chairman told Miami Today that although he hasn’t funded the Million Orchid Project specifically, he has made a contribution to Fairchild Tropical Botanic Garden and he plans a second one that has not yet been announced.

“I’m so excited for everyone who lives in Miami or visits to come and see what we’ve done, which is just magical,” Mr. Bittel said. “Every time we plant another plant or a tree in the ground, we take a positive step towards reversing the negative impact of climate change.”

One Response to Lincoln Road blanketed with 500 native orchids