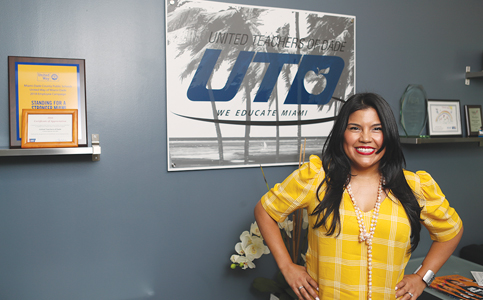 Karla Hernandez-Mats grew up aware of unions. A first-generation American born to Honduran immigrants, the twice-elected United Teachers of Dade (UTD) president learned about the power of advocacy from two family generations.

Her first teacher in that respect was her father, an accountant in his native country who couldn’t continue his practice once stateside. To provide for his family, he worked as a farmhand until he was offered a job as a carpenter.

“They said, ‘We’ll train you, give you the skill set you need, and there’s a union – we can give you all the information, tell you about advocacy work,” said Ms. Hernandez-Mats, the first Hispanic UTD president in the group’s history. “My dad, having worked in the fields so long, [knew] what it was like not to have rights or a good paycheck. From a very early age, he taught me the importance of being in the labor movement, advocating for people’s rights.”

She attended public school, a right not afforded to her grandmother, whom she discovered was illiterate. Because they weren’t expected to be breadwinners, women in Honduras didn’t have equal educational opportunities.

“Talking to her, understanding what she went through, I developed this sense of advocacy for children, education and making sure women’s rights are respected,” she said. “Those things shaped me.”

After graduating from high school, Ms. Hernandez-Mats went to Honduras to do humanitarian work. She discovered a passion for special education, a field in which she’s spent 16 years.

But problems affecting her profession, especially those related to funding, troubled her. Rather than wait for others to develop a fix, she ran for UTD secretary treasurer in 2013 and won. Three years later, she won the presidency, a role that sees her lead the largest labor union in the Southeast United States and the fourth-largest teachers’ union in the nation.

This year, following the successful referendum that gave Florida educators a pay raise, she won her re-election bid by a landslide 73% vote.

“People are inspired to see boots on the ground, people fighting for public education, bringing not just community awareness [but] national awareness on issues,” she said. “People can see we’re serious about the work we do. When Tallahassee doesn’t provide what they need to, we’re going to find other ways to make it happen because everybody deserves a good quality of life.”