Advertisement
The Newspaper for the Future of Miami
Connect with us:
Front Page » Healthcare » After legal war, Jackson Health’s Doral hospital to be done in 2020

After legal war, Jackson Health’s Doral hospital to be done in 2020 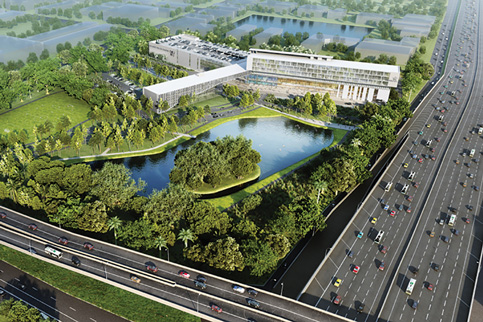 With a major change in state law on hospitals this month, Jackson Health System is moving forward with its plans to open José Milton Memorial Hospital at the Jackson West Medical Center in Doral.

The county-owned health system says it will open the 100-bed acute care hospital next year. The hospital sits beside the main building and garage on the 27 acres Jackson Health System owns at 7800 NW 29th St.

The hospital component is steering clear of entangling legal issues since the Florida legislature has removed the certificate of need (CON) requirement to add hospitals as of this month.

The state’s Agency for Health Care Administration was once in charge of approving the certificate of need, under which hospitals had to prove that there was a need in the area for inpatient beds. Now the agency has shifted its attention to approving requests to changing the licensure requirements for hospitals, according The News Service of Florida.

“The proposed rules would maintain the four review cycles, but split them into two different categories,” the news service explained last week. “One category would deal with applications for hospital facilities and hospice. The other category would be dedicated to nursing homes and intermediate-care facilities for individuals with disabilities.”

But Jackson Health System President and CEO Carlos Migoya said last week that the Agency for Health Care Administration (ACHA) had approved the certificate of need twice. The agency was never the issue, he told Miami Today, but rather the system’s competitors were the cause of years of litigation.

“The way the certificate of need worked is that you can have the competitor sue you,” Mr. Migoya said. “It cost millions of dollars to Jackson over the last several years to fight the ACHA ruling. Those were the court battles going on. Deregulation ceases all of that litigation.”

As recently as spring, other institutions had been battling Jackson for a hospital in Doral. One of them, East Florida, sought its own hospital in the neighborhood. East Florida was pushing forward the idea of a Doral Medical Center with an 80-bed acute care center.

In litigation to obtain a certificate of need for the José Milton Memorial Hospital, Judge William David Watkins’ recommended April 30 that the state deny Jackson’s request. He wrote that there was no need for a hospital in Doral.

Now, with litigation out of the way, construction will last until the end of 2020, Mr. Migoya said.

The first building of three to be completed will be the medical office building, spanning about 60,000 square feet and rising four stories, he said. Different specialties, for adults and children, are to be housed in the medical office building, including diagnostic, two emergency rooms – one for adults, another for children – operating rooms and outpatient facilities. Mr. Migoya said he expects the building to be completed by March 2020 and fully operational by June.

The other building on site will be the parking garage. The third is the José Milton Memorial Hospital.

The hospital will be completed by the end of next year, said Mr. Migoya: “The rest of that building, now that CON regulations passed, we are starting to work on the planning for the rest of the tower that was being shelved.”

4 Responses to After legal war, Jackson Health’s Doral hospital to be done in 2020