Advertisement
The Newspaper for the Future of Miami
Connect with us:
Front Page » Communities » Plan to combat intrusive political tactics 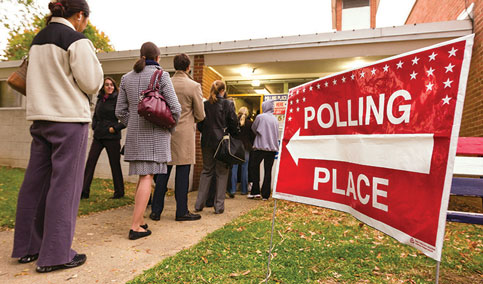 The results of a county study into aggressive and intrusive political demonstration tactics at Miami-Dade voting locations are in, and while no solutions are explicitly prescribed ahead of this year’s election season, the county’s elections department has several recommendations.

Mr. Souto said he’d brought forth the item after seeing group fighting and other misbehavior while voting during the previous election.

“I said, ‘This is unreal. This is totally abnormal [and] unacceptable,’” he said. “We need to bring civility into Miami-Dade County and let everyone, regardless of which part of the county [they’re from], to vote in a calm, civilized and organized way.”

The item received sweeping support from every commissioner present on the dais, two of whom – Jose “Pepe” Diaz and Barbara Jordan – added their names as co-sponsors.

“People are getting to the point where they don’t even want to go vote… because of the intensity,” Mr. Diaz said. “And when you ask that the person from that particular precinct do something, they said their hands are tied, that it would interfere with the right to free speech. I don’t think free speech falls into the part about disturbance of other people.”

But state law prohibits elections departments from taking corrective action outside the100-foot “no-solicitation zone” against political campaigning. Instead, enforcement of any aggressive or intrusive tactics is left to law enforcement and “other regulatory bodies under the law that control the conduct of regular activity within the county,” the report said.

The Miami-Dade Elections Department served about 883,000 voters through early voting periods in the last four county-wide elections, the report said. During that time, the county received 42 documented complaints, including:

■12 for the 2018 general election, of which six were for use of bullhorns and other loud music, two were for aggressive campaigning outside the 100-foot zone and one was for fighting among campaigners.

■Seven complaints during the 2018 primary election, of which five were for aggressive campaigning, including one instance of damaging personal property.

■13 complaints during the 2016 general election, of which 10 were for aggressive campaigning, including two instances of voter harassment and one report among campaigners that required police intervention.

■10 complaints during the 2016 primary, of which seven were for aggressive campaigning, including one instance in which campaigners were seen “bombarding” elderly voters and insisting on offering “voting assistance,” and one instance of fighting among campaigners that required police intervention.

Complaints received for actions at voting locations are handled case-by-case, the mayor’s report said, and “routinely resolved without the need for law enforcement intervention.”

The report said the county elections department consulted elections supervisors from eight other Florida counties, including Broward, Palm Beach, Orange and Seminole, and found none has any election-specific regulation to preserve a campaign’s right to free speech and access to voters.

Because Miami-Dade has up to 30 voting locations, hundreds of candidates and thousands of campaigns, the report said, “it can be challenging… to maintain order and civility, [a] delicate balance” between free speech and the right to vote without being harassed.

■Assigning an additional parking lot attendant to locations with heavier turnouts and large parking lots “to assist in maintaining order… and ensure voters have clear access to the poll.”

■That the county police department place early voting sites on its patrol routes “to ensure there is no obstruction of roadways, early voting site entrances and/or any other public safety concerns.”

■Notification of the county police department in the event a complaint is lodged to the elections department regarding aggressive or intrusive campaign tactics.