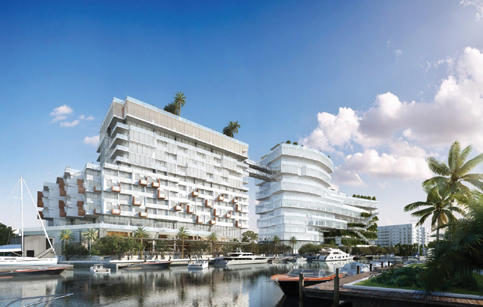 The Miami River Commission voted unanimously Monday to recommend that the City of Miami not approve 555 River, a proposed 12-story hotel and office complex at 517-663 NW South River Drive.

Board members listened as a parade of residents from the historic Spring Garden neighborhood complained that the project is out of scale for the area, is not in keeping with the area’s marine character, and would create too much noise and traffic. Many residents said zoning in the area is haphazard and that they were never notified when zoning was changed prior to developers moving in.

A development team that includes Avra Jain and others proposes to build the mixed-use project, which would comprise 120,000 square feet of offices, a 175-room hotel (and 39 suites that would be run by the hotel), a rooftop bar and restaurants on a site that for many years has been a commercial shipping terminal. The river commission’s vote doesn’t stop the project, which the developers can still pursue through city channels.

The owner-developers are seeking a 30% reduction in required parking, but say they are working with neighbors to accommodate their concerns. They have scrapped plans for a rooftop grill and will preserve at least a 25-foot setback along the water’s edge, though some balconies several floors up do encroach, said Iris Escarra, their attorney.

Elsewhere, the design conforms to all zoning requirements, she said. All restaurants will be inside the buildings and the developer is working with an acoustic engineer to contain noise.

“We’re in negotiations with the Spring Garden Civic Association but have not had a meeting of the minds,” she said. The complex’s design incorporates elements from the surrounding area, including greenery. “It’s an airy design that leaves some open spaces and preserves the through-view. People can still enjoy the river.”

“We trust you to protect our neighborhood,” Carlos Salas, president of the civic association, told the river commission. “This is a monstrosity.”

The area fronting the river from the Fifth Street bridge to Northwest 27th Avenue should remain a mix of residential homes and marine businesses, he said. “Dealing with the developers has been frustrating.”

Amanda Hand, Spring Garden resident and attorney, disagreed that the project can get a parking waiver, and insisted The Riverwalk will be harmed. “We’re asking the Miami River Commission to maintain the river.”

“We realize that the property will be developed, but here we’re looking at a project that has nine waivers,” Ms. Hand replied.

“Have the boatyards had a chance to give their opinion, and have we done a traffic study?” Ms. Fernandez asked. She also asked whether Little Havana residents had been given a chance to weigh in.

“This is a very long process,” Ms. Escarra replied. “You’re the beginning.”

“The City of Miami should have looked at this whole area,” said commission member Sandy O’Neil, “but that’s not in our marching orders here. Whatever the city commission approves is what’s going to go there. I support moving forward” with all conditions to which the developer has already agreed and some recommendations by commission members. That motion failed.

“Here’s what will happen,” Mr. Aguirre said. The city commission would be notified that commission had heard the matter had reached no opinion, he said.

But commission member Manny Prieguez moved to deny project approval outright, which passed unanimously. The city commission will be notified of that decision.