Advertisement
The Newspaper for the Future of Miami
Connect with us:
Front Page » Government » Miami OKs land swap for new administration building 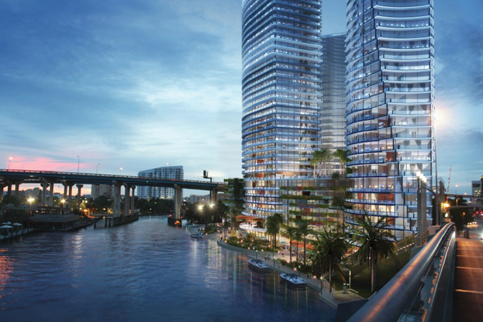 The Miami City Commission has wrapped up a complicated real estate deal that will result in a new government administration building, freeing up a valuable riverfront site for three towers from a private developer.

The major move did not come without contention and opposition, and ultimately a vote of 3 to 2.

Voting to approve three resolutions on the deal June 27 were Chairman Ken Russell and Commissioners Wifredo “Willy” Gort and Keon Hardemon. Voting “no” were Joe Carollo and Manolo Reyes.

Neither Mr. Carollo nor Mr. Reyes was on the commission when this matter first bubbled to the surface several years ago.

City officials in 2015 said the Miami Riverside Center office complex on the Miami River was “functionally obsolete” and needed replacement. They said the government office building at 444 SW Second Ave. was not the “highest and best use” of the waterfront site.

In seeking proposals for a new office building, city leaders decided to offer up the riverfront site to a private developer, for sale or lease.

Two proposers showed interest but in the end only one bidder remained: Lancelot Miami River LLC, an affiliate of the Adler Group.

In July 2018, Adler representatives presented a development plan to the city commission that would bring a new hotel to the river, along with about 37,000 square feet of stores framed by three to four towers, and improved public access to the water.

To accomplish this, Lancelot sought a long-term lease with option to buy the city-owned property at 444 and 460 SW Second Ave. – Miami Riverside Center.

A key part of the deal is development of a new office complex for the city.

The city charter requires voter approval of the lease or sale of waterfront property owned by the city. The question went before voters and was approved.

At a meeting this January, on a split vote of 3 to 2, the commission selected the site for construction of a new office facility, after objections from Mr. Reyes and Mr. Carollo, the two “no” votes.

The chosen site for the new office building is 1.6 vacant acres at 230 SW Third St., labeled as the Nexus Site, immediately north of the city’s current riverside center.

At the June 27 meeting, Mr. Carollo continued to question the condition of the existing office building, and pushed for renovation, a much less costly option.

Mr. Reyes objected to the projected high cost of constructing the new building – up to $150 million – and said by the time the city had paid off the bonds used for the project, the building would be obsolete.

■Declare the intent of the city to issue tax-exempt and taxable special obligation bonds “or any other financing mechanism advantageous to the city,” with the expected total maximum principal of $150 million, for a new city administration building and related parking facilities at 230 SW Third St.

■Authorize the city manager to negotiate and execute a development management and construction agreement between the city and Lancelot Miami River LLC, “whereby Lancelot shall manage the development and construction of the city’s new administrative building, including necessary parking … for a fee not to exceed four percent (4%) of actual expenditures, consistent with the approved project budgets.”

■Authorize the city manager to execute an agreement and lease between the city and Lancelot Miami River LLC, whereby the city leases about 3.15 acres of city-owned property at 444 and 460 SW Second Ave. to Lancelot for a 99-year term with an option to buy, for an annual rent equal to $3,620,000.

In a separate news release June 27, attorneys with Greenberg Traurig spoke of the successful deal between the City of Miami and Lancelot.

Nancy B. Lash and Ryan D. Bailine represented Lancelot Miami River LLC in its agreement with the city to build its new headquarters as part of a planned nearly $1 billion mixed-use project on the Miami River.

The overall project, named Nexus Riverside, will be built in phases over five to seven years, with the new city office building to be developed as part of the first phase.

Plans call for the development of up to four towers, including the city’s 230,000-square-foot office building, multi-family rental units, retail space, and a shared garage.

Construction of the city’s new facility is expected to begin by the end of the fourth quarter of 2020. The city will remain in its present administrative building until the new site is completed.

Ms. Lash said, “Negotiating the deal was complex, due, in part, to the intricacies of timing the construction and financing of the city’s new headquarters with Adler’s development of Miami Riverside Center and its adjacent parcel.

“We were mindful that there can’t be any down time – the city can’t go dark, so all of the other aspects of the agreements had to be in sync with that requirement,” she said.

“This agreement represents a win for the City of Miami and its residents,” said Mr. Bailine.

“The city will receive a new, modern facility and will be monetizing its land holdings. The project will continue to bring more economic development and vibrancy to the Miami River area, providing local residents with a new opportunity to live on the Miami River and enjoy it via Nexus Riverside’s various retail offerings,” he said.