Advertisement
The Newspaper for the Future of Miami
Connect with us:
Front Page » Profile » Nitin Motwani: ‘Surprises’ due at $1.2 billion Miami Worldcenter project 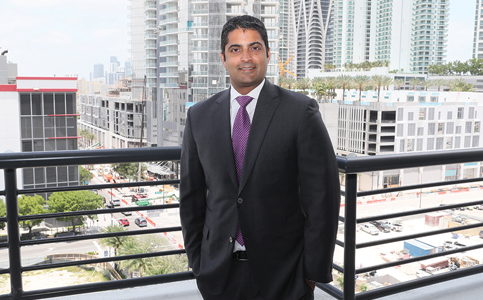 A lot has happened since Nitin Motwani came on as managing principal of Miami Worldcenter Associates in 2006. The nation endured a recession. Smart devices put the knowledge of the world in our pockets. The Miami Heat won three NBA championships.

Over 13 years, Mr. Motwani and partner Art Falcone watched the city around their massive 27-acre planned project go through a developmental explosion, the Miami skyline sprouting a hedge of skyscrapers, the streets below transforming as well.

But the central objective of the project, whose first building topped off this year, remains the same, he said.

“While the project has evolved over time, the intention to create a true city within a city – to tie all the pieces together – hasn’t,” he said. “We went from being the north part of downtown to [its] center. That allows us to really take advantage of all the foot traffic that currently goes around [us], to welcome it into our site.”

One Response to Nitin Motwani: ‘Surprises’ due at $1.2 billion Miami Worldcenter project