Advertisement
The Newspaper for the Future of Miami
Connect with us:
Front Page » Communities » Miami Beach OKs funds to start dredging clogged waterways 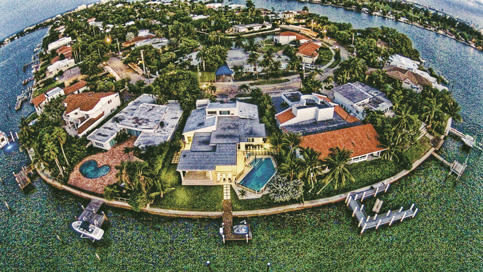 Sediment continues to pile in most areas of Biscayne Point Waterway and Collins Canal, cutting boat access at certain points.

It’s a big issue for his residents, said Brian Gilderman, president of the Biscayne Point Homeowners Association. “There are some very shallow spots under the bridges and access points throughout the canal where at low tide people’s boats have trouble getting through.”

The problem has persisted for 20 to 30 years and worsens with time, said Ronnie Issenberg,  homeowners association member. “After Hurricane Irene and Irma, we had a lot of debris in the water. We got it cleaned up along the banks, but the sediment has built up so much over the years that when you have boats going side by side and you only have the very center of the canal at 2 feet as you start moving towards the sides with the two boats trying to pass each other each way, you are at a foot-and-a-half of water, which will bottom out a boat, even a smaller boat.”

The majority of the Biscayne Point Waterway is in dire need of dredging, according to Mr. Issenberg. About two 30-foot sections, or 60 feet total, are navigable compared to the rest of the island.

“The big trouble areas are definitely underneath the bridges, because those bridges catch sediments,” Mr. Issenberg said. “It gets bad underneath those four bridges – the two on the west side, the one in the middle and then the one on the east side.”

Lack of funding is the cause of years of delay. The Florida Inland Navigation District is the most common donor for dredging, but grants can only apply to areas that historically have been navigable waters. The fact that Biscayne Point Waterways and Collins Canal are man-made exclude them from the organization’s funding eligibility.

“The fact that we weren’t able to access that grant money and as a city there’s never been a project to do that dredging work, we had to do a study a few years back but it was not followed up with any capital funds,” said the city’s environment and sustainability director, Elizabeth Wheaton. “As part of the G.O. [general obligation] bond project we were putting together our wish list of projects that we were in need of [and] this came up to the top.”

Commissioners this month approved funding to start solving the issue as soon as possible.

“We have in tranche two of the G.O. bond the waterway project,” said Commissioner John Elizabeth Alemán. “It’s like a two-year permitting process. If we don’t allocate the funds to do the permitting and all the analysis that goes with it, we will never be ready to put that money in tranche two.”

A portion of the general obligation bond is committed to the Waterway Restoration project. The administration plans to conduct a waterway survey, update the dredging analysis last conducted in 2003, obtain permits to dredge the necessary areas, and mitigate any potential seagrass critical habitats. The process will restore navigation conditions to Biscayne Point Waterway and Collins Canal. The project costs the city $6 million, and bonds are to be issued in the fiscal year 2022.

The city is to conduct a bidding process next year to find a contractor to manage the study once the funding is available. The first step of the study is to understand where sediment accumulated the most and then brainstorm a plan to remove the sediment in those areas.

“We do that work and we’ll have a better understanding of the methodology for the actual dredging itself,” Ms. Wheaton said.

Design and planning is expected to take two years. The second phase thereafter focuses on construction.

The city can’t pinpoint how long the dredging would take. “I am not sure off the top of my head,” Ms. Wheaton said. “We don’t have the design. When we get to that stage and as we move into the future we’ll have a better understanding of what those timelines are going to look like.”

Mr. Gilderman said he expects dredging won’t drag on, but permitting might take a while: “We don’t think the project itself is going to take that long but we think getting the permits is going to take forever, and that’s the problem.”

He blames the number of state and local agencies required to come together in the task.

Planning and design are to start next year and construction is to begin during the fiscal year of 2021 or 2022.

The long-term goal for city officials is to understand how to maintain municipal waterways and periodically provide upkeep to the area.

“The idea would be to understand what it would take to do ongoing maintenance dredging,” Ms. Wheaton said. “Our goal would be to set up a program which would allow us to come in and periodically dredge so that we do not reach the level where we are today, where we are having to wait years before getting in there.”