Advertisement
The Newspaper for the Future of Miami
Connect with us:
Front Page » Real Estate » Downtown Miami master plan ‘once in lifetime’ chance 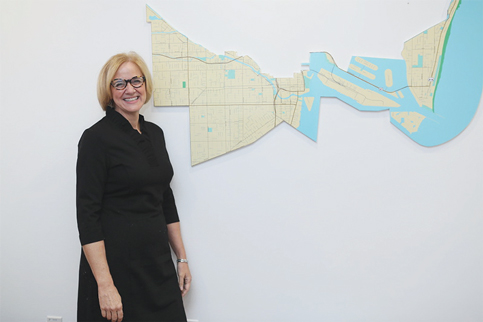 A “once in a lifetime opportunity” to create a vibrant community amidst a clutter of 16 county-owned buildings and properties can transform the heart of downtown Miami, county Commissioner Eileen Higgins told a Greater Miami Chamber of Commerce committee last week.

The new Downtown Rapid Transit Zone, which the county created last July, could lead to “a visionary master plan for these 20 acres” filled with government buildings, she said. The process began June 4 when commissioners ordered a visioning study of the area that’s to be completed by December.

Among additions to the area Ms. Higgins suggested to the chamber’s New World Center committee, which deals with downtown, are schools, parks and green space, affordable housing, office space, a community center, a bus shelter and terminal, a walking street from the Miami River to Biscayne Bay, adequate street lighting, places for police and media trucks to park near county hall, and drop-off and pickup points for ride-sharing services to unclog traffic.

New development in the area could include blended residential, commercial, office, hotel and restaurant developments tied into government buildings and transit facilities, as well as public open spaces and pedestrian bridges, Deputy Mayor Jack Osterholt wrote in a June memo to county commissioners.

Ms. Higgins noted that the area is at the heart of “the greatest transportation system in the county,” with Metrorail and Metromover, but “it’s not yet a perfect place…. It’s not yet a real neighborhood.”

In a Powerpoint presentation, she showed chamber members at their annual goals conference areas where buses come into the heart of downtown. “Do you really want to walk along this dark wall if you come in at night?” she asked. “Do you see a streetlight?”

She noted the open space along streets and under the Metromover.

“We have a lot of space… that is not being well used. All of this space I just showed you is county-owned property” and thus available for upgrades and development in the special zone regardless of City of Miami zoning, which doesn’t apply there. Also, “we don’t have to wait for the private sector.”

“I have been working with the mayor to see what we can do with those 20 acres,” said Ms. Higgins, whose commission district covers the rapid transit zone.

As it is, she said, the government buildings themselves are not enough. “You individually get a lot of fantastic public buildings and you don’t in any way get a neighborhood.”

Neighborhoods generally have residences, and Commissioner Higgins calls for those to help resolve “the number one county problem, housing.” She sees housing rising on some of the county land in Government Center: “Put out an RFP so we can build some workforce housing.”

Well before December she sees “a couple of charrettes” being held to seek community input because “there are opportunities to do something different” in creating the county’s master plan for what belongs there.

Among possible changes are the revamping or removal of the Philip Johnson-designed plaza linking the main library and the two-building HistoryMiami – and the likely removal of the museum or use of the air rights over it.

Asked by chamber member Jack Lowell, executive vice president of Colliers International real estate brokers, Ms. Higgins said she was not sure of the concept for controlling the new district, whether the process would be undertaken by a single master developer or in separate pieces. That, she said, will be determined by “what is in the best interest of county and residents.”

One Response to Downtown Miami master plan ‘once in lifetime’ chance