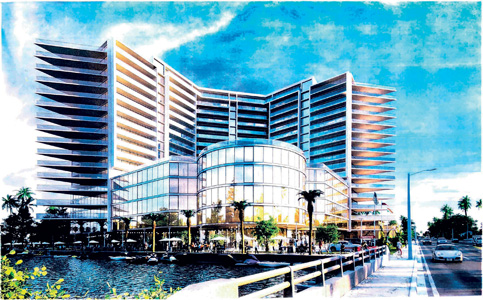 The Polish American Club of Miami is proposing a major mixed-use development on its property on Northwest 22nd Avenue, near the Dolphin Expressway, that would include apartments, offices, retail, a restaurant and more.

The site is at 1250 NW 22nd Ave. (Pulaski Avenue), on a tributary of the Miami River called South Fork, near Fern Isle Park and north of the expressway. The property is immediately west of a 22nd Avenue bridge.

Club representatives made a presentation on the project to a committee of the Miami River Commission on Monday.

James Murley, chair of the Urban Infill and Greenways Subcommittee, deferred the matter for one month, affording the club some time to meet with neighbors.

Mr. Murley said the proposed development is massive in comparison with neighboring properties. “You’re changing a lot … you should do a little more due diligence,” he said.

Speaking about the proposal was project architect Jacek Schindler.

The club will be seeking land use and zoning changes from the City of Miami.

The current zoning classification is T5, which allows the mixed-use development of multi-family residences, commercial, office and community centers.

The club is considering asking for a rezoning to T6-24, which would allow up to 24 stories, though the project as designed is 18 stories, said Mr. Schindler.

A site plan and related documents reviewed by the committee members Monday show the total square footage is about 681,102, of which 234,903 square feet would be residential and 115,063 would have office uses.

Office spaces would be on floors 2-5. A sixth-floor pool deck is planned.

The project is to include 204 apartments, a gym, family activity room, social club and Chopin Ballroom, Polish Deli, co-working spaces, and a rooftop restaurant.

There are also to be retail shops, walking paths and a public riverwalk.

In a letter of intent to the river commission, the club wrote: “The original Polish American Club (PAC), founded in 1938, sits on a prime parcel of land located on the Miami River. Although the Club has fallen into disrepair, the land is still owned by Club and is a very desirable location. Now is the perfect time to bring back the Club, but with so much more.”

It continues, “PAC’s Board of Directors is spearheading a project that will erect a building worthy of the beautiful revitalization efforts in the area and will also stand as a symbol of Poles in America. Preliminary designs include a modern representation of the Polish White Eagle emblem, picturesque landscaping, walking paths, boutiques, and apartments, retail, professional businesses, PAC and other Polish related organizations.”

The organizations listed include: American Institute of Polish Culture; Chopin Foundation; Honorary Consulate of the Republic of Poland; Polish American Chamber of Commerce of Florida and the Americas; and the White Eagle Apartment Complex.

“The neighborhood will be proud of this new center,” said Mr. Schindler. “We look forward to our continued presence on the river.”

He said the site would allow smaller boats and perhaps a water taxi on the waterfront.

One resident questioned the club’s ownership of the property.

Committee members said upon reviewing the plan again in July, an affidavit of ownership should be presented.

Mr. Murley stressed the importance for the club representatives to meet directly with neighboring property owners to discuss what is planned for the site, before returning to the committee and later the full river commission.