Advertisement
The Newspaper for the Future of Miami
Connect with us:
Front Page » Government » Miami River office space swap could cost City of Miami $150 million 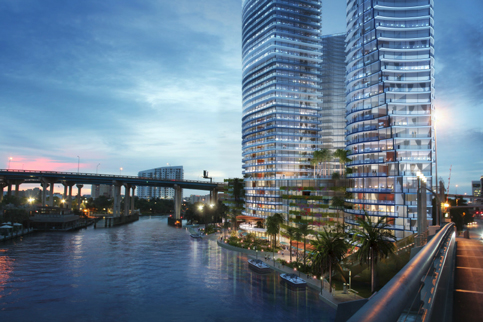 The City of Miami is preparing to devote $150 million toward its new government office complex near the Miami River, as part of a complicated deal to turn over city land to a private developer who plans a large mixed-use residential project on the riverfront site.

This involves the fate of the city’s current Miami Riverside Center (MRC) at 444 SW Second Ave., on the north bank of the river and just east of I-95.

Three proposed resolutions to advance the overall plan are up for consideration by the city commission today (6/13).

The Riverside Center complex was deemed “functionally obsolete” several years ago and city officials began to seek developers interested in a package deal that would result in a new administrative office building.

Two proposers showed interest but in the end, only one bidder remained: Lancelot Miami River LLC, an affiliate of the Adler Group.

In July 2018, Adler representatives presented a development plan to the city commission that would bring a new hotel to the river, along with about 37,000 square feet of stores framed by three to four towers, and improved public access to the water.

A key part of the deal is development of a new office complex for the city government.

The city charter requires voter approval of the lease or sale of waterfront property owned by the city. The question went before voters last November and was approved.

From there, a site for the new city office complex needed to be chosen.

At a meeting this January, on a split vote of 3 to 2, the commission selected the site for construction of a new office facility, after objections from Manolo Reyes and Joe Carollo, the two ‘no’ votes.

An analysis of sites throughout the city by consultant CBRE concluded the “ideal” location for the new city office facility is 1.6 vacant acres at 230 SW Third St., labeled as the Nexus Site, immediately north of the city’s current Miami Riverside Center. That site was chosen.

On today’s agenda is a resolution that would declare the official intent of the city to issue tax-exempt and taxable special obligation bonds “or any other financing mechanism advantageous to the city,” with the expected total maximum principal of $150 million, “in order to, among other things, reimburse itself from the proceeds of such special obligation bonds or financing mechanism for funds advanced by the city for certain expenses incurred with respect to the acquisition of real property, the development, construction, and installations for a new city administration building” and related parking facilities, and for certain capital improvements at 230 SW Third St.

Also on the agenda is a resolution authorizing the city manager to negotiate and execute a development management and construction agreement between the city and Lancelot Miami River LLC, “whereby Lancelot shall manage the development and construction of the city’s new administrative building, including necessary parking … for a fee not to exceed four percent (4%) of actual expenditures, consistent with the approved project budgets.”

The final resolution authorizes the city manager to execute an agreement and lease between the city and Lancelot Miami River LLC, whereby the city leases about 3.15 acres of city-owned property at 444 and 460 SW Second Ave. to Lancelot for a 99-year term with an option to buy, for an annual rent equal to $3,620,000.

A background memo on the deal states, in part: “The New Facility Agreement provides for Lancelot to manage the development and construction of the City’s New Facility, located on a portion of the Nexus Site. The City’s New Facility is estimated to cost approximately one hundred forty million dollars ($140,000,000), inclusive of hard costs (including infrastructure), soft costs, and land costs that shall not exceed twenty million dollars ($20,000,000).”