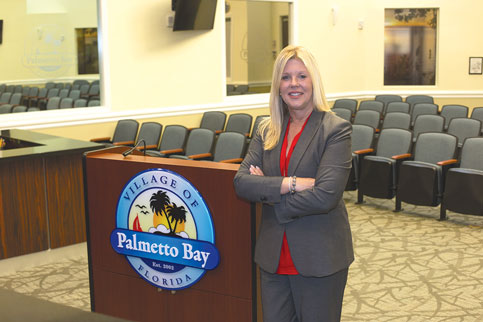 Palmetto Bay Mayor Karyn Cunningham believes that everyone has tipping points in life, occasions when enough factors are in play to spur positive change. For her, that moment came after 18 years teaching, when a change in leadership in the United Teachers of Dade prompted her to seek a job with the county education union.

That, she said, was where her interest in politics took root. The Miami-Dade native and longtime village resident traveled throughout the county and to Tallahassee, where her advocacy work saw her meet with legislators and local mayors.

But at home, attending meetings and speaking with other residents, she said she wasn’t hearing the conversations she thought were important to have. She aimed to change that.

After a failed bid for vice mayor in 2012, she regrouped. Rather than quit, she said, she used it as an opportunity to better understand the wants and needs of her community.

“I started asking people, ‘Why not me? I got 30% of the vote, but what made you vote for someone else?’ And they said, ‘We liked you, but we didn’t know you or see you present here in the community,” she said. “From 2012 to 2014, I drilled down on finding out what was important to our residents. And I ran for council Seat 1 and won.”

Ms. Cunningham served as councilwoman for the next four years. In 2015, the Florida League of Cities bestowed on her the “Home Town Hero Award.” Over time, she started to believe she’d get more done serving in the position long held by the village’s founding mayor. And on Nov. 6, 2018, she won.

“In a small village like Palmetto Bay, it should be resident-driven,” she said. “You need to know what the residents are thinking and about the direction they want you to take. I embarked on my campaign to run for mayor and was successful.”

Since then she’s spearheaded efforts to enhance the village, including focuses on improving mobility and creating a vibrant downtown that attracts new residents, businesses and visitors.

She hasn’t lost sight of what first earned her a seat on the council, however.

“From the beginning of my public life as a councilwoman, one of the things that I knew was important was that you need to stay in touch with people,” she said.

To that end, she created “After Hours with Karyn,” a monthly coffeehouse meet-and-greet with residents; “Saturdays in the Park,” a monthly convening with residents in one of the village’s several parks to talk parks improvements; and “Serve with the Mayor/Street-by-Street,” an initiative through which residents join her every three months to work on village beautification projects.

“I want to bring service to the community,” she said. “And we have people who want to serve.”