Advertisement
The Newspaper for the Future of Miami
Connect with us:
Front Page » Communities » Red light cameras cited for unfair targeting 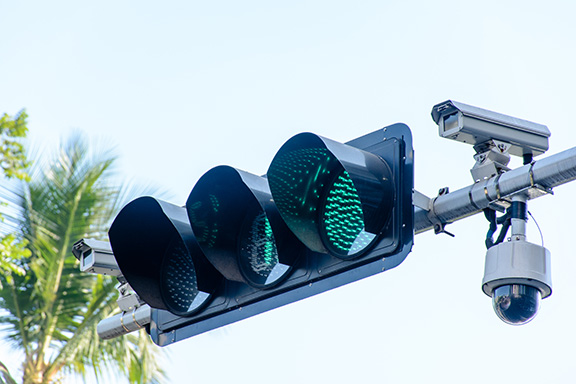 Cities operating red light cameras on US 1 in South Dade may disproportionately target nonresidents commuting from unincorporated areas, Miami-Dade Commissioner Dennis Moss said Monday, adding that he plans to “have that looked at.”

“In other words, the cities have… cameras set up that will basically target motorists who are going into unincorporated Miami-Dade County, but at the same location they don’t target motorists that are going into their cities,” he said during a June 3 transportation committee meeting. “If you’re ticketing both ways, OK, [but] I just want that to be looked at because if that’s the case, that’s not fair, that my residents primarily get hit with tickets.”

Mr. Moss said he’d “not necessarily heard” from constituents about there being a problem but he might sponsor a resolution or discussion item to invite other commissioners to weigh in on the matter.

Doing so would mark the first time in more than three years county lawmakers officially discussed the controversial traffic infraction detectors and the 15th related talk in less than a decade.

It also would be the second such discussion Mr. Moss requested related to the cameras installed by cities on a county road.

But by late 2012, the county still had yet to install one red light camera anywhere in the unincorporated area, where it had jurisdiction to place them, and had not issued a single related citation.

County lawmakers by that time – including Commissioner Joe Martinez, the primary sponsor of the 2010 resolution – had since concluded the cameras did more damage than good.

“Red light cameras are used to generate government funds rather than to improve public safety,” then-Commissioner Lynda Bell wrote in a memo accompanying a resolution the board adopted Dec. 4, 2012, urging cities not to use the technology.

Four months later, at his first discussion item on the matter, Mr. Moss questioned the Village of Pinecrest’s right to install cameras at six US 1 intersections.

“As a county we get nothing out of the deal, and I don’t want to see… US 1 become a red light trap…,” he said. “If you do it within your own municipality, that’s fine.”

To date, Miami-Dade has yet to install a red light camera or generate funds based on infractions they detect.

In June 2016, commissioners amended the county code to prohibit their use at the county level but amended the ordinance to allow cities to continue using them.

And many do, including Pinecrest, which still operates six cameras along US 1 between Southwest 68th Court and 132nd Street, Pinecrest Public Works Director Mark Spanioli confirmed Tuesday.

“They’re verified before sending the ticket to make sure they did a violation,” he said. “There’s always ups and downs, but I think it’s [about] safety.”

The two other municipalities Mr. Moss mentioned, however, say they do not use red light cameras on the thoroughfare.

Throughout the state, disputes continue over red light cameras, which can also be used to enforce right-turn violations.

In November, six months after the Florida Supreme Court upheld the legality of red light camera use by local governments, Miami-Dade Judge Steven Leifman ruled that the City of Aventura’s red light camera program was unlawful.

Cities, he explained, need to have a consistent set of rules for red light cameras before violations can be enforced.

Traffic infractions detected by red light cameras cost $158 at first, but that can increase to $262 if drivers cited fail to pay, according to Florida Online Traffic School.

And regardless of who’s driving, the vehicle’s registered owner receives the bill. If more than one name is listed on the registration, the first person named gets cited.

According to the Florida Department Highway Safety and Motor Vehicles’ “Red Light Camera Summary Report,” 508 red light cameras were active in Florida as of June 30, 2018, down from 629 the year prior.