Advertisement
The Newspaper for the Future of Miami
Connect with us:
Front Page » Education » Naeem Khan fashion studio and school gets new plan 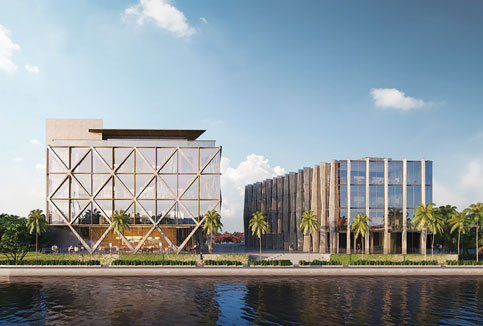 A modified plan for a fashion studio and school on riverfront land owned by Miami-Dade County earned support Monday from the Miami River Commission.

On a 9 to 4 vote, the commission recommended approval of the project, with some conditions.

New York fashion designer Naeem Khan plans to build a studio for design and manufacture at a county-owned site at 1175 NW South River Drive, under his long-term lease with the county.

The project has evolved since first being considered in 2015.

Revised plans in late 2017 amended the site plan to include a vocational school. At that time, Mr. Khan explained that as the project became more defined he began to wonder how to include the community in his venture.

The idea of the school was born, he said, to help teach a new generation the art of fashion design and the workings of the fashion industry.

The site fronts on more than 200 feet of the river’s south shore, and dockage is planned for the entire length, along with a 25-foot-wide public riverwalk.

The latest version of the plan for Naeem Khan Studios was reviewed March 20 by the river commission’s Urban Infill and Greenways Subcommittee.

■Securing Florida Department of Transportation permission to construct the public riverwalk connector to the west on FDOT right of way at the 12th Avenue Bridge and removing the storage lot beneath the bridge.

■The applicant submits updated plans to the City of Miami for permitting.

■The project include the public Miami River Greenway signage required by the Miami 21 zoning code.

On Monday, commission members reviewed renderings from the previously presented project and new materials showing the latest plans, with two major changes: the studio building has an added floor, coming in at five stories; and there are changes to exterior wall materials and the façades, showing much more glass.

Documents submitted by project architect Alfonso Jurado show the studio building with a total of 48,604 square feet and the school building coming in at 34,699 square feet (in four levels), for a total of 83,303 square feet.

Another change since the first proposal is that the bulk of material and supplies transported to the site will be ground shipments via trucks, instead of the earlier plan to bring the materials in by ships.

The county, as owner of the property, intends to use the dockage at the site for marine law enforcement uses, the commission learned.

Across the river on the north is the Spring Garden historic neighborhood.

The commission was told the board of the Spring Garden Civic Association voted to oppose the project in its entirety.

Mr. Salas said the project will bring a lot of added traffic to the area.

Iris Escarra, an attorney representing Mr. Khan, said this area of the river is identified as the middle river, which allows mixed-use developments.

“We do have a cafeteria on the ground floor [for students and employees],” she said. “We are not asking for a restaurant … It is not anticipated and is not in our application.”

Spring Garden residents have long complained of noise and music from diners and revelers on and near the river, as more bars and restaurants have cropped up.

Pushed on why the applicant won’t agree to a covenant promising no restaurant-bar, Ms. Escarra said Mr. Khan is only leasing the property and would be prohibited from such a covenant.

The motion to recommend approval calls for the county to agree to a covenant that specifies “no outdoor dining.”