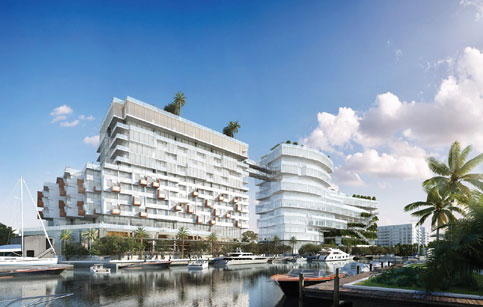 A plan to build a 12-story project on the Miami River offering offices, hotel rooms, luxury residential units and restaurants has been deferred for at least a month by the Miami River Commission.

On a divided vote Monday, the commission voted to defer the case until its July 1 meeting, with the intent to send the project back to committee and require city officials to answer planning and zoning questions.

A development team that includes Avra Jain and others proposes to build a mixed-use project called 555 River House on riverfront property at 517-663 NW South River Drive. The site is currently a commercial shipping terminal and has been for many years.

The plan includes 120,000 square feet of office uses, a hotel with 175 keys, 39 residential units on top of the hotel, and restaurants.

The plan includes a rooftop bar and swimming pool for hotel guests.

Two of the issues the commission wants city officials to address are whether the rooftop use requires special permission, and whether the project is entitled to a 30% reduction in required parking.

The owner-developers presented their plan to the commission’s Urban Infill and Greenways Subcommittee on May 17.

Carlos Salas, president of the civic association, reported then that association members are concerned about the proposed height of the project, restaurants with outdoor seating, the rooftop pool and bar, and waiver requests to reduce parking, narrow the public riverwalk and waterfront building setback.

Mr. Salas read and distributed a letter from Ernest Martin, who lives in Spring Garden and is co-chair of the subcommittee, in opposition to the project.

He read: “I would like to express my opposition to the project, 555 River House, located at 516-663 NW South River Drive for the following reasons:

“(1) The project is too close to the 8-story residential building to its immediate west which is already under construction.

“(2) The height of the project is overwhelming to its surroundings and specifically to the Spring Garden Historic District directly across the River. The proposed project will create a canyon effect and will carry noise up and down the River.

“(3) It is inappropriate to allow outdoor dining on the ground floor level along the River with residences nearby. There should be no outdoor dining.

“(4) The rooftop pool and bar are also problematic for the same reason. Noise is a huge concern for all nearby residents.

“In conclusion, the project is simply too dense, too tall, and has amenities that are inappropriate and incompatible for this area of the Miami River,” Mr. Martin had written.

Mr. Salas said the proposed 12-story project is huge and will “hover over” Spring Garden and Little Havana.

He said the river commission shouldn’t allow another shipping company to go out of business to make room for this project.

Charles Greenfield, a Spring Garden homeowner, voiced concern about noise and music from the proposed rooftop venue. “Noise is a huge problem,” he said, as noise from other properties is carried into the historic district, which has more than 150 homes.

Iris Escarra, an attorney representing the developers, characterized the property as “a very funky site” and said the design team had challenges with the odd-shaped parcel.

Because of this, she noted that some of the planned public riverwalk is narrower than the code calls for, and developers are requesting waterfront setback waivers at a couple of “pinch points” on the property.

There will be a new seawall and the project will include dockage and 600 feet of new riverwalk, Ms. Escarra said.

She told the commission the developers will not “max out” the property, as they are leaving about 200,000 square feet on the table, along with 200 residential units and 400 hotel rooms.

Ms. Escarra also said the project has no plans for outdoor dining. “Our restaurants are inside the building,” she said.

The project would be two distinct buildings, connected by elevated walkways.