Advertisement
The Newspaper for the Future of Miami
Connect with us:
Front Page » Transportation » Massive I-395, I-95, SR 836 and signature bridge work rolling 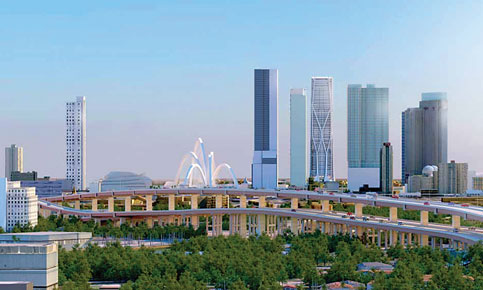 All three pieces of the $802 million design-build project encompassing I-395, I-95 and SR 836 are underway and on-schedule, Florida Department of Transportation (FDOT) spokesperson Oscar Gonzalez said.

Mr. Gonzalez confirmed this week that while some parts of the design-build project are “being further developed” by contractor Archer-Western-de Moya Joint Venture, FDOT still targets fall 2023 for “overall completion.”

Preliminary activities began in January for the project, which includes construction on I-395 of a six-arch “signature bridge” spanning 1,025 feet over Northeast Second Avenue and Biscayne Boulevard, a double-decker “viaduct” over 836 between Northwest 17th Avenue and the Midtown Interchange, and pavement work on I-95 between Northwest Eighth and 29th streets.

Mr. Gonzalez said lane closures for all three projects are being done at non-peak hours.

Foundation work on some of the I-395 bridges that are part of the 1.4-mile roadway project will begin later this month or in early July, he said, with work on the signature bridge set to start late this year.

“Much of the work on the signature bridge can be done without major impacts to traffic on I-395 as there is available right-of-way outside the travel lanes,” he said, adding that a closure of Northeast 12th Street between Biscayne Boulevard and Northeast Second Avenue will be necessary “sometime in December” so FDOT can begin work on the bridge’s central foundation.

To compensate, he said, drivers will be able to use Northeast 13th Street, which will be widened to three lanes to accommodate the added traffic, and Northeast First Avenue, which will be temporarily converted to two-way traffic to allow access to the westbound I-395 ramps.

The total I-395 project, upon completion, “will create additional capacity… with a total of three through lanes in each direction and provide separate connector ramps to and from I-95,” the project website says.

Roadway workers are also preparing to widen the 836 bridges over the Lawrence Canal and Northwest 17th Avenue to permit “future traffic shifts” and so Archer-Western-de Moya can establish a work zone in the median, Mr. Gonzalez said.

“Once the work zone is set up, the contractor will begin major work on the double-decker foundations and columns, which will be followed by the erection of the bridge caps and beams and finally the roadway deck,” he said.

Once finished, the viaduct will feature two lanes in each direction providing drivers with a direct connection to the MacArthur Causeway, allowing drivers to entirely bypass the Midtown Interchange, project documents show.

The existing one-lane 836 ramp to northbound I-95 – which backs up regularly and permits inconsiderate drivers to cut in at the last minute, imperiling others on the roadway – will gain a lane, doubling its capacity.

Work on I-95 is progressing too, Mr. Gonzalez said, with construction happening between Northwest 17th and 29th streets “to extend a northbound auxiliary lane” that will receive added traffic from the eastbound 836 ramp to northbound I-95.

Replacement of concrete pavement for all travel lanes along that stretch is also in the project plans.

Other ongoing projects there, he said, include drainage, installing new overhead sign foundations and structures, and construction of a new median barrier wall.

A potential fourth piece of the monumental project cleared Miami Commission Chambers in March, when city commissioners authorized the city manager to make a deal with FDOT to collaborate on turning 33 acres under the I-395 signature bridge into an open space and urban destination.

The city, Mr. Gonzalez said, is now “undertaking the conceptual design, programming and business and operations plan” for the space and will coordinate those plans with FDOT, which maintains jurisdictional ownership and approval of the space and is responsible for its build-out based on agreement by both parties.

In addition to beautifying the area below the bridge and turning it into a usable shared space, the planned lighted park will provide “a contiguous trail” reconnecting Overtown, downtown Miami, Edgewater and the Omni neighborhood, the project website says.

Mr. Gonzalez said he expects city to develop its initial concept design for the park this fall, after which both parties will “go through iterations of design based on FDOT feedback.”

Once finished, Miami plans to lease the activated park, for which the state will grant the city nonexclusive jurisdiction for “zoning, planning, permitting and operation thereof,” the city resolution said.

The agreement includes provisions for profit, stating that FDOT and the city “possess a mutual understanding [that] the [park] should be planned and designed in a manner that allows for revenue-generating opportunities in order to fund operations and maintenance…”

Mayor Francis Suarez said there is “no better space” to build a new and better park, as it sits central to the downtown arts and entertainment districts and provides a link to Miami Beach.

Construction of the park will be completed “during the final stages of the [I-395] project,” Mr. Gonzalez said, because “all the overhead… bridge work needs to be [done] prior to the community space being opened.”