Advertisement
The Newspaper for the Future of Miami
Connect with us:
Front Page » Profile » Chris Cruzpino: Leading the Miami-Dade market for Regions Bank 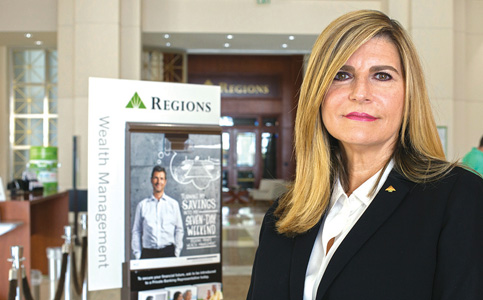 Christina “Chris” Cruzpino this year is celebrating 35 years in banking, a career she began in 1984 with what at the time was the largest commercial bank in Florida, Barnett Bank, which was later acquired by Bank of America.

Last year, while she celebrated a decade with Regions Bank – which reported record 2018 earnings, including a fourth-quarter net income 28% higher than the year prior – the private wealth executive took on an additional responsibility: Regions Bank’s market executive for Miami-Dade County.

In that role, the bank said she is tasked with collaborating with colleagues and community members in identifying opportunities for the bank and its associates and positively impacting the area by responding to local needs.

Ms. Cruzpino, who describes herself as “conservative in nature” in terms of value principles, says the key to Regions Bank’s continued success is staying true to its promise to prioritize the customer experience above all else – an emphasis that earned its designation as having the best overall reputation among top banks in the country, according to American Banker Magazine.

“Our promise is to our clients and to deliver a great experience and, through that, to expand relationships for our clients,” she said. “We’re sitting in a good place, doing things the right way, and we will continue to focus on taking care of our clients. The rest follows.”