Advertisement
The Newspaper for the Future of Miami
Connect with us:
Front Page » Education » University of Miami Rosenstiel School team fishes for mahi farms

Written by Rebecca San Juan on May 28, 2019
Advertisement 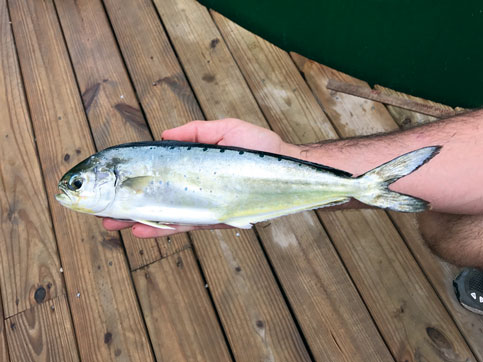 A University of Miami team researching sustainable commercial mahi-mahi farming is aiming to shift the public’s preference toward eating a whole fish at a meal rather than fillets and seeking government incentives for investors to support domestic aquaculture.

But the commercialization of the mahi-mahi itself is taking a while to figure out, because their growth rates are challenging. The mahi-mahi spawns every week and exemplifies the fastest growth rates ever recorded for a fish. They reach a pound or a pound and a half in three months, the same size that it takes a branzino or sea bass two years to reach.

Someone who wishes to grow mahi-mahi to more than a pound or a pound and a half, however, faces the challenge of the species developing their sexual differentiation at three months. Two males in one tank leads to one fierce fight after another until only one of the two remains.

Researchers at the UM’s Rosenstiel School of Marine and Atmospheric Science on Virginia Key are concluding that mahi-mahi aquaculture will work only if production of monosex mahi-mahi is developed or the fish are sold at three months.

The UM team would need additional funds to conduct monosex mahi-mahi culture and use cultured fish instead of rootstock fish. But then the team faces the challenge of making that practice viable, given that the public often prefers wild-caught fish over cultured fish.

The preference for wild-caught fish is drenched with misconception and hinders any successful application of monosex research, a Rosenstiel School expert says.

“It is like if you go to a restaurant and demand a wild fish, it is the same as going to a steakhouse and saying, ‘Hey, I want the steak of a wild cow,’” said Daniel Domingues Benetti, professor and director of Aquaculture at the Rosenstiel School.

Most fish served in restaurants are cultured, Dr. Benetti says. He thinks selling mahi-mahi at three months will prove to be a better option than monosex fish production.

He’s also working to change the public’s preference to plate-sized fish rather than fillets. Consumers who opt for the fillet instead of the whole fish force vendors to toss away 65% of the fish.

“The reason why marine aquaculture works well in Europe and in Asia is that customers eat whole fish, plate sized,” Dr. Benetti said. “If we raise fish, we have to develop a market in the United States for whole fish.”

Dr. Benetti is also pushing for investors to support aquaculture in the US rather than abroad. In particular he favors offshore practices rather than inland practices, given that competition is high for land and water use.

Utilization of offshore resources means less pollution too, he said. “The offshore environment is appropriate for that because you have a much greater energy out there. You have greater currents, you have greater depth. We can produce without polluting.”

US aquaculture companies that have government funding, he says, are choosing Mexico and Panama and exporting products back home because of the lack of regulation and permitting processes abroad. The seafood trade deficit, as a result of these practices, is over $15 billion a year.

Dr. Benetti is working alongside several organizations, such as the National Oceanic and Atmospheric Administration and Florida Sea Grant, to push for a permitting process for companies to conduct offshore aquaculture and inland aquaculture. Public support, he said, is needed to make efforts a reality.

“We should be discussing what types of incentives we are going to give to investors who want to do it,” he said. “It is time, high time.”

Meanwhile, the university’s aquaculture program and hatchery continue to research sustainable practices of commercial mahi-mahi farming. Each of 22 graduate students is focused on different research, looking at different species.

The program and hatchery receive funds from a variety of partners and grants that are used as seed money for research and technology that will eventually land on the market.

Alternatives can provide ecological and economic efficiency, given that 60% to 70% of production costs come from fish feed. The team is creating a diet of black soldier fly as a replacement for fish oil.

Progress is being made in establishing a sustainable commercial industry in the US. The technology already allows the Japanese flounder to be commercialized domestically in a land-based setting.