Written by Jesse Scheckner on May 28, 2019
Advertisement 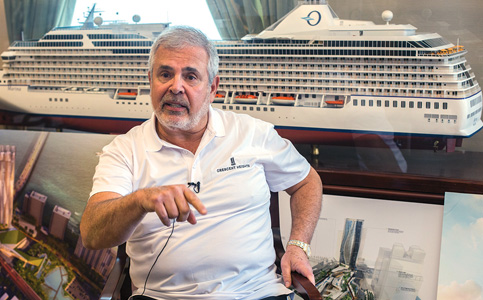 Russell Galbut was born at just the right time to become dazzled by Miami Beach. It was after World War II, during the economic boom of the ’50s and ’60s. Perhaps it was then, while watching the area transform into what he describes as “the world’s vacation land” turned “retirement Mecca,” that he first became interested in how neighborhoods can change – and how one could and should go about changing them.

He grew up learning to value discipline and studiousness, characteristics his father, an attorney who’d served for 36 years as a military officer, instilled in him and his three older brothers. After spending his formative years working jobs around the Beach, including stints in a car repair shop and as a night auditor at the Fontainebleau Hotel, he left for college, where he studied hotel administration and sat for and earned his CPA. Those joint skill sets, he said, were “absolutely necessary for [his] future.”

He then worked at an accounting firm for two years, which provided him with his first exposure to the real estate world. In 1976, he left the firm, bought his first building and enrolled in the University of Miami School of Law and Allstate Construction College, where he “really learned how to build buildings.”

“For many years,” he said, “I was building buildings on the side to be able to pay the costs of law school.”

In 1989, he co-founded development firm Crescent Heights with Sonny Kahn and Bruce Menin. The company’s early focus was, naturally, on his home city, and included projects like the Alexander, Carriage Club, Casablanca and Decoplage.

Now, three decades later, the firm – among the largest residential condominium companies in the nation, with over 50,000 residential units developed – has footprints in over 15 markets throughout the nation, England and the Middle East.

During that time, he also got into the cruise industry, serving as director of Prestige Cruise International, which Norwegian Cruise Line Holdings purchased in 2014. Last year, he was named Norwegian’s chairman.

Locally, he said, Crescent Heights’ focus has shifted from Miami Beach to the city of Miami, a move he attributes to contrasting interests in development. And the firm is eying the Miami neighborhood of Edgewater for development soon.

“We are significant landowners there,” he said. “I believe you’re going to see some exciting projects coming about there in the near future.”