Advertisement
The Newspaper for the Future of Miami
Connect with us:
Front Page » Arts & Culture » New World Symphony funded for 4k wallcast technology

Written by Rebecca San Juan on May 28, 2019
Advertisement 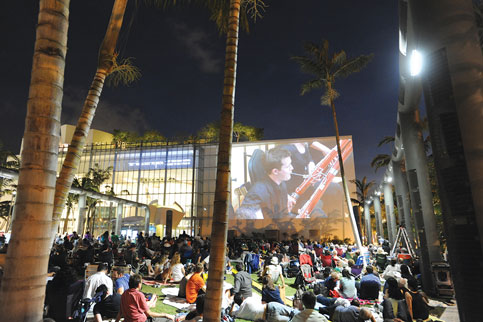 The New World Symphony has secured $3.8 million from a general obligation bond issue that allows the organization to install 4K technology in its home at the New World Center.

The New World Symphony will spend the funds and later be reimbursed by the city. The organization informed city commissioners last week that the remaining half will be spent by the summer of 2020 on projection installments.

The 4K technology to be installed is typically used in sports stadiums. The New World Center will be one of very few facilities in the country to use the technology for classical music enthusiasts.

The majority of the installation will occur inside the New World Center with the planting of new cables.

Mayor Dan Gelber said, “There is an expectation that there are going to be more things projected onto that wall, which I’m hoping is going to be soon.”

The center at 500 17th St. offers 756 seats inside as well as the free live projections on a 7,000-square-foot wall at SoundScape Park at 400 17th St. Concert goers – both those sitting indoors and outdoors on picnic blankets and beach chairs – listen and watch the orchestral academy productions.

The production of the Wallcast concerts at SoundScape Park require a multi-disciplinary approach with a team focused on a variety of aspects, including audio, lighting and video. Shots for the outdoor performance are produced with the help of almost 20 cameras dispersed on the stage and hanging from the ceiling inside the concert hall.

The orchestra is comprised of 87 young musicians. Recent graduates from leading institutions across the globe compete for a three-year fellowship. The New World Symphony says it has over 1,500 music school and conservatory graduates competing for 35 spots per year.

The visionaries behind the New World Symphony, 11-Grammy award winner and artistic director Michael Tilson Thomas and couple Lin Arison and the late Ted Arison, founded the organization with the intent to share classical music with as many people as possible.