Advertisement
The Newspaper for the Future of Miami
Connect with us:
Front Page » Arts & Culture » Tequesta Indians’ Miami Circle Park to get state upgrade 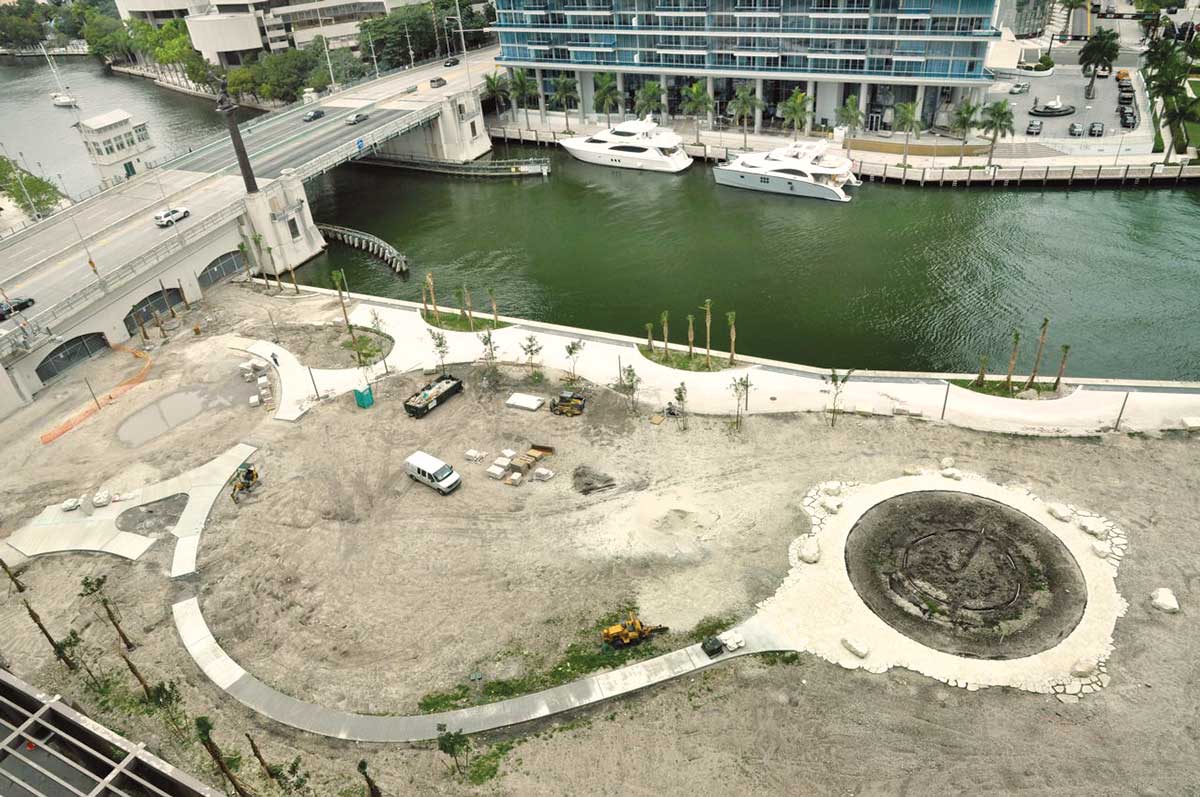 The state is preparing to make long-term improvements to Miami Circle Park, home to a 2,000-year-old Tequesta Indian artifact at the mouth of the Miami River.
The Department of State has set aside about $500,000 for an improvement plan for the state-owned 2.5-acre site on the northern edge of Brickell.

Timothy A. Parsons, representing the department, presented the plan to improve the famous historic site, also known as Miami Circle at Brickell Point, to the Miami River Commission on May 6.

According to Mr. Parsons, the state had already made some improved changes to the property but much of the progress was erased during Hurricane Irma in September 2017.
The state has since regrouped and is prepared to make a substantial investment to bring “more sustainable” and long-term changes to the site.

The circle is a national historic landmark that serves as a park.

In the summer of 2016, state officials took a more aggressive approach to handling the Miami Circle, recognizing its historical significance and committing to improve it, maintain it and preserve it.

State officials vowed to the river commission that “getting the site right” was now a top priority.

The open-air property had fallen into disrepair and suffered from illegal parking of vehicles including a fleet of scooters, a lack of upkeep and maintenance, homeless encampments and a constant collection of trash and dog feces.

Working in cooperation with river commission members, the state began to make changes for better lawn service and maintenance, landscaping, and worked with neighbors to rid the site of scooters and other illegally parked vehicles and more.

Mr. Parsons admitted it has often been a struggle to maintain the property, in part due to its vulnerable location at the mouth of the river on Biscayne Bay, and its exposure to the elements.

Wind and water heavily damaged some landscaping and planters placed on the park’s outer edge, he noted.

The overall plan is a smorgasbord of improvement options, to make the site more attractive and keep the grass green, he said.

“We’re reimaging it and elevating it,” he said.

The move to make longer term improvements focuses on the site being both a valuable historic resource and a public gathering space, said Mr. Parsons.

He admitted the department doesn’t have the $1.3 million from the legislature so officials will meet with stakeholders and community members to help decide what parts of the overall plan can be accomplished.

Hard shell, heavy material planters are to be brought to the site, Mr. Parsons said. Plans to refresh the property include planting 1,466 new plants and covering bare dirt along the public riverwalk with crushed shells.

He commended the Miami Parking Authority for installing a series of bollards around the cul-de-sac central to the site, with the intent to keep autos, trucks and other vehicles from parking in the park.

Some large boulders that have been damaged by trucks will be replaced as well.

Mr. Parsons said he was thankful the parking agency was still considering a new parking area under the Brickell Avenue Bridge approach, just west of the Miami Circle.

The first improvements to be made will be at two focal points, he said.

A decorative fence will be put around the circle, which has been reburied for protection and preservation. The area is “a sacred location” to Native Americans in the area, he said.

The fencing will help keep dogs and people off the space.

The other area, east of the circle, will also get a small railing around it. This area is used by a local Native American who stages ceremonies at the site.

Work will also include filling areas that have eroded, and some re-sodding. Major improvements will be to fix the irrigation system and the drainage, he said.

“The site is very important to all of us,” said Horacio Stuart Aguirre, river commission chairman. “I am concerned about you not having the money you need.”

Mr. Parsons said there may be some fundraising opportunities to help pay for more site work, but for now $500,000 is available beginning July 1.

Mr. Parsons said he expects to meet with the city’s Historic and Environmental Preservation Board in June to gain permission for the new improvements. Asked when he anticipates the work to begin, Mr. Parsons said improvements should start the end of summer.

He said the work will be as resilient as possible, with a goal of mitigating damage from adverse weather.

The Tequesta Indian artifact was uncovered in 1998 during a pre-construction survey. The state purchased the property in 1999 for more than $26 million. The site was placed on the National Register of Historic Places in 2002.

Mr. Parsons is division director and State Historic Preservation Officer at the Division of Historical Resources, Florida Department of State.

The Department of State hopes to make subsequent improvements in a few years that might include museum-quality exhibits.