Advertisement
The Newspaper for the Future of Miami
Connect with us:
Front Page » Communities » Miami moves toward filling in FEC Slip 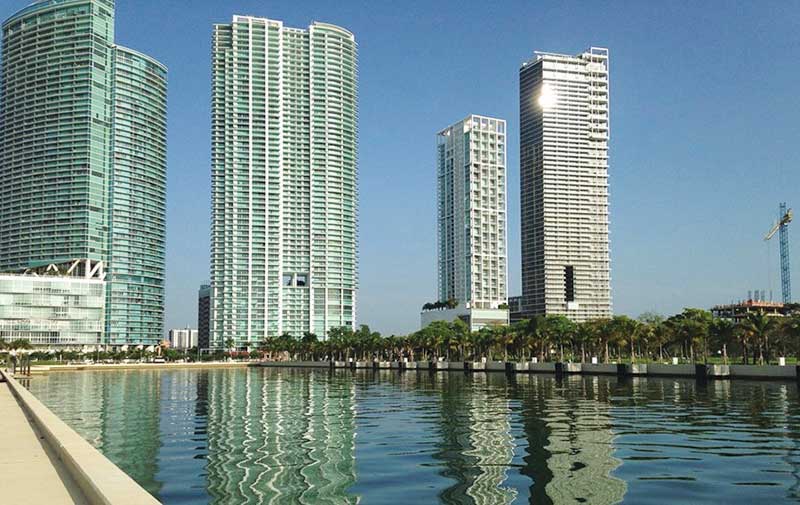 The Miami City Commission has taken the first step toward filling in the large FEC Slip abutting Maurice A. Ferré Park downtown.

The potential move would add nearly 10 acres to the park, recently renamed in honor of Mr. Ferré, a former mayor and long-time community leader.
Championed by Commissioner Joe Carollo, the commission passed a resolution directing City Manager Emilio González to undertake all appropriate actions to fill in the Florida East Coast Railway Deep Water Slip (FEC Slip) in Biscayne Bay, adjacent to and between Maurice A. Ferré Park and AmericanAirlines Arena, and the two abutting inlets.

The legislation would limit the use of the filled areas to “only park and other green space uses for the pleasure, recreation, and education of the public.”

Commission Chairman Ken Russell voted against the resolution, saying it would be premature to fill the slip. He cited other potential park-like uses, including devoting the area to water sports like kayaking and to diving.

Mr. Russell said he supports the concept of more green space in the city, but noted the probable high cost of filling the slip.

“It will be very expensive to fill… My ask is that we start an analysis of the best use of the slip, involving the Parks and Recreation Department,” Mr. Russell said before the vote. The slip is in his district.

Nathan Kurland, a Coconut Grove resident and former board member of the Bayfront Park Management Trust, spoke against filling in the slip, calling it “a bad idea.”

Mr. Kurland said the city invested millions to improve the deep water slip, including installing large marine bollards with the idea of welcoming tall ships and other maritime events.

He admitted the slip is underutilized but said the Bayfront Park Management Trust is responsible for making the slip more useful.
Mr. Carollo first brought up the idea of filling in the slip last month, after several people objected to a formal request for proposals issued by the city to build a commercial marina, store and restaurant there.

Mr. Carollo said then that the county is considering more dredging to deepen the seaport, and with coordination the bottomlands dug up could be “free fill” to close the slip.

“It could be a win-win for everybody,” he said. “By filling in the slip we’d give [the park] the size it truly deserves and increase green space tremendously. It would make the park into a bigger crown jewel than it is today.”

On May 9, Mr. Carollo said the city might have to reimburse the Florida Inland Navigational District (FIND) board up to $6 million it had given to the city for the slip several years ago if filling in the slip gets final approval.

Mr. Carollo said filling in the slip can lead to a day when all of the city’s vast waterfront parks are united.

South of the slip is AmericanAirlines Area, Bayside Marketplace and Bayfront Park. North of the slip is Ferré Park and the Pérez Art Museum Miami.
Most of those sites are framed by the city’s improved and landscaped public baywalk. The commission recently approved negotiating a lease with the state to allow for expansion of the baywalk northward from the park, under the MacArthur Causeway.

The May 11 resolution was amended slightly to have the city manager study all that needs to happen to fill the slip, and how much it will cost. He is to report back to the city commission for a final vote.

Mr. González asked for 60 days to study the proposal to fill the slip and report back. Mr. Carollo said he can have 90 days.
The FEC Slip is a former seaport dock on Biscayne Bay that was joined by two other slips nearby, long ago filled in.

9 Responses to Miami moves toward filling in FEC Slip