Advertisement
The Newspaper for the Future of Miami
Connect with us:
Front Page » Government » Miami-Dade looks at redeveloping Government Center

Written by Jesse Scheckner on May 15, 2019
Advertisement 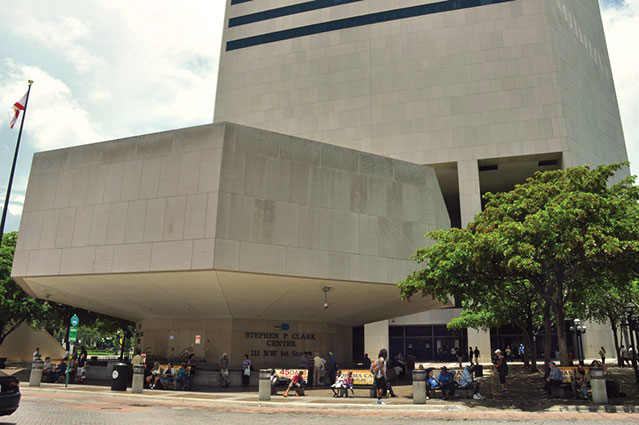 Ten months after Miami-Dade lawmakers reclaimed control over properties around Government Center, they’re one vote from looking at redeveloping the area.

Commissioners in committee Tuesday voted for an item that would, if approved June 4, order a “visioning study” by December of 16 properties around the county’s downtown hub.

The goal, says Commissioner Eileen Higgins’ item, would be to “determine the optimum mix of uses and cohesive designs to revitalize [the] area…with signature, sustainable, compact, pedestrian- and transit-oriented developments” for business, government and residences.

Prior to the jurisdiction change, the properties had been in the now-defunct Government Center Development of Regional Impact program, Deputy Mayor Jack Osterholt wrote last year. It was established in 1972 to ensure state and regional collaboration on large-scale projects with high traffic and other impacts. The state eliminated it in June 2015.

Mr. Osterholt wrote that new area development, such as blended residential, commercial, office, hotel and restaurant developments with transit and government facilities, as well as public open spaces and pedestrian bridges, could “result in additional housing and business opportunities.”

The study request is the latest county move to rebuild the area since last November, when commissioners approved zoning for a general development plan for the properties.

“The next step in the development review process,” Ms. Higgins’ item says, “is an administrative site plan review of detailed design plans.”