Advertisement
The Newspaper for the Future of Miami
Connect with us:
Front Page » Communities » Brickell open-air riverfront site to offer 7 restaurants 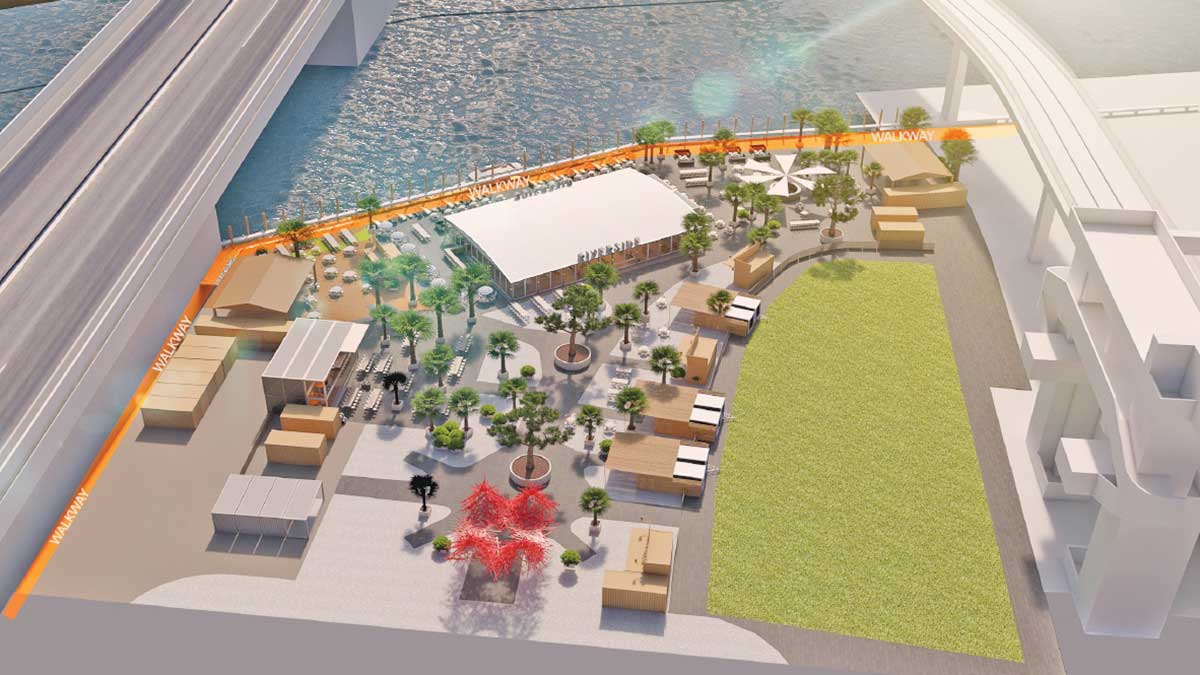 An elaborate plan for a family-oriented, open-air culinary experience on riverfront property in Brickell has the endorsement of the Miami River Commission.

A company has leased vacant land at 431-451 S Miami Ave. with plans for Riverside, a venue with a dozen components including seven local restaurants, a tap room and an outdoor event space of 25,804 square feet.

He sought the commission’s support before heading to city officials for a temporary use permit, renewable annually for up to three years.

The river commission unanimously recommended approval, with several conditions, including increasing a side-yard public walkway adjacent to the South Miami Avenue Bridge from 4 feet wide to 5 feet, and using real grass in the large community open space instead of artificial turf.

The side-yard path would extend from the on-road greenway and connect with a proposed extension of the public riverwalk, which will be 15 feet wide.

The site plan also shows an internal pedestrian promenade that provides pathways to each of the food offerings.

Food and beverage offerings are to include a coffee and ice cream shop, gourmet tacos, gourmet burgers, seafood, pizza, Asian fusion, steakhouse grill, Riverside Main Lounge and more. The tap room will be designed to look like a microbrewery but won’t be an operating brewery, Mr. Riley said.

A farmer’s market is also being considered on Sundays.

One commission member asked about the structures to house the restaurants.

Mr. Riley said they’re basically “dressed up” containers from a company called Eventstar.
The land is due north of the sprawling Brickell City Centre, still in the midst of its continued growth. The vacant land is hugged by the bridge and the Fifth Street Metromover Station.

The area is also home to several condo and apartment towers.
Mr. Riley said the company envisions Riverside as a pedestrian-oriented destination.
Parking would be off-site, with patrons walking or taking a shuttle to get to the riverfront property, he said.

“This is more for the area’s residents,” Mr. Riley said.

The large open area on the eastern edge is described as a multi-purpose public park for community gatherings and events like family picnics and perhaps free movie nights.

The site will be improved with about $200,000 worth of landscaping, including about 90% native plants.

Mr. Riley said the sound system will have localized speakers for ambient background music playing softer than a conversation.

He said the proposal requires that most sales to be for food, at least 51%, with a maximum of 49% liquor sales.

Mr. Riley presented the commission a list of promised operational restrictions including compliance with the city’s noise ordinance. Proposed hours would be 11 a.m. until midnight Sunday through Thursday, and 11 a.m. to 2 a.m. Fridays and Saturdays.