Advertisement
The Newspaper for the Future of Miami
Connect with us:
Front Page » Opinion » Florida shoots itself in the foot by not fully funding tourism

Florida shoots itself in the foot by not fully funding tourism

The end of Florida’s legislative session this week might also lead toward the end of the public-private venture created to add state tourism. In the land of sun, sand and surf, that’s unthinkable – but true.

One of every eight persons employed in Florida was working in leisure and hospitality as of March, according to federal jobs figures. Statewide, those jobs have increased 2.4% in the past year to a record high 1,249,000 Florida workers. These people rely on the marketing of Visit Florida, the partnership that the legislature is about to strip of some or all of its state funding.

State funding for Visit Florida was earlier authorized through Sept. 30. But House members were upset about high-profile contracts totaling $15 million that Visit Florida signed in 2017 under different management and agreed with the Senate only to extend its life an extra nine months on a trial basis through June 2020, with reduced funding. With new safeguards already in place, history shouldn’t have been a stumbling block where the state’s economic health is concerned.

In fuming about spending of the past, the Legislature jeopardized the economy of the future, an economy fueled by 126.1 million visitors in 2018. If the average visitor spends, say, $1,000 in Florida, that’s $126.1 billion in spending here. Government tax collections on visitors’ Florida spending alone should approach $10 billion a year – a figure that the Legislature is willing to jeopardize by reducing the messages around the nation and the globe that lure visitors.

House speaker José Oliva of Miami Lakes was correct when he said that spending a few million dollars to lure visitors couldn’t possibly account for about $126.1 billion in visitor spending. “There’s a whole series of factors. Visit Florida is probably least among them,” Mr. Oliva said.

No doubt. But what percentage of that is Visit Florida really responsible for – 10%, 5%, 3%? Even at just 3% of visitor spending, Visit Florida would bring in about $3.8 billion a year on its spending this year of $76 million. If that’s the case, the agency is adding about $380 million to state tax collections and 3% of state visitor jobs, or about 37,000 more people at work in the industry.

If you don’t like an assumption of 3% of visitors, do the math at 2%, or even just 1%, and the state still comes out far, far ahead with the help of Visit Florida. Visit Florida says its own studies show that the state gets a $2-plus return for every $1 it spends with the partnership. Even at that low estimate, $2 coming back for every $1 spent is still pretty good.

It’s true that every area of Florida has a local organization, like the Greater Miami Convention & Visitors Bureau, that also promotes the industry here. But the cut in Visit Florida funding won’t be divided up into checks to help local areas promote themselves. The visitor industry will just be that much short on promotion efforts.

Gov. Ron DeSantis eventually agreed to a deal to extend Visit Florida funding at a reduced level of $50 million while he evaluates its effectiveness.

Looking locally, what will such a cutback in state promotion mean here? 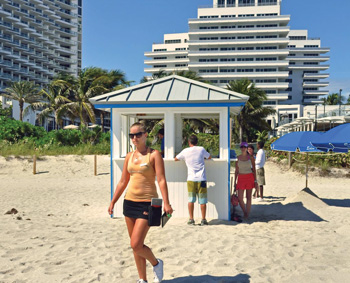 Honestly, as Mr. Oliva correctly said, we wouldn’t lose most of our visitor industry if Visit Florida totally disappeared. People come here for a variety of reasons, including business and to visit family. Those groups are all going to keep coming, regardless. It’s the people who haven’t chosen a site for vacation and who could be swayed by the right message that Visit Florida attracts – but that’s still a very significant number. The one-third cut in state tourism funding will reduce the number of those visitors.

The bottom line is that proper Visit Florida spending that lures visitors doesn’t cost the state a penny – it just puts people to work and fills government coffers with tax money. So not funding Visit Florida fully was not a decision to save money but a decision to downplay the industry that has been Florida’s backbone.

Florida has tried this in another industry, filming. A few years back the state reduced, and then cut out, incentives that lured filmmakers, assuming that the industry needed us more than we needed them and that feature films and TV shows would keep flowing in. Instead, the industry flowed out to states like Georgia that had incentives – and our skilled workers in the industry followed. It’s going to take us years to rebuild the trained human capital that makes filming attractive here.

Do we really need to go through all that again by cutting funding for the far-larger tourism industry? Dana Young, Visit Florida CEO, was quoted as saying “I would think that Georgia, Texas, South Carolina, Alabama, they are cheering this decision. California, they are cheering this decision because it’s going to increase their market share to the detriment of Florida taxpayers.”

Again, smart spending in industry attraction doesn’t cost us: it repays us many times over.

Lawmakers should realize that every one of them has constituents whose future employment hinges on the visitor industry. Those jobs should be secured, and augmented.

We shouldn’t punish Florida’s workers for possibly unwise past spending by subtracting jobs. Every dollar cut from Visit Florida costs us more than it saves.