Advertisement
The Newspaper for the Future of Miami
Connect with us:
Front Page » Top Stories » Coconut Grove Playhouse center stage, but garage is the star

Coconut Grove Playhouse center stage, but garage is the star 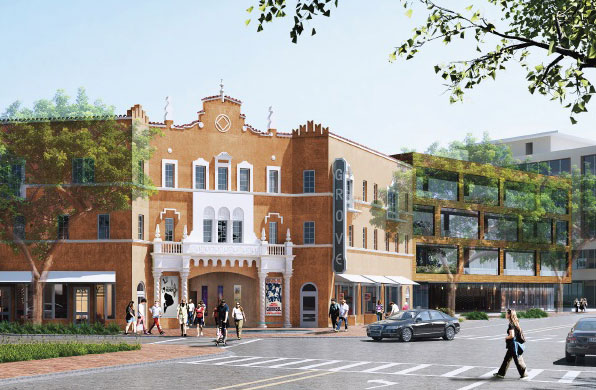 The fate of the idle Coconut Grove Playhouse is center stage next week at a Miami City Commission meeting, but city officials are considering building a garage there no matter what.

Miami-Dade County plans to restore and redevelop the historic 3500 Main Highway site beside a garage lined with retail from the Miami Parking Authority.

On April 25 the city commission was to hear the county’s appeal of a city Historic and Environmental Preservation Board 6-4 decision denying its plan. But Chair Ken Russell moved to defer the appeal after a written request from US Rep. Frederica Wilson, Bahamian Heritage Initiative honorary chair, who asked for time to study the issue and weigh in. The playhouse abuts West Grove, which has deep Bahamian roots.

After more than an hour of argument over deferral, commissioners set a special 9 a.m. meeting May 8 at City Hall.

The state-owned theater is leased to the county and Florida International University. The lease calls for site restoration and a new modern theater run by GableStage. The county’s plan would restore the façade, demolish the larger auditorium and build a new 300-seat theater. Opponents keep battling to restore the entire structure, including the 1,000-seat auditorium.

“Irrespective of the playhouse, we need the garage,” said Mayor Francis Suarez. He suggested it be separated from the overall project and built. At the very minimum, he said, the city must get the garage going because the Grove needs more parking.

Art Noriega, parking authority CEO, said the garage couldn’t be a solo project unless the lease with the state was amended.

“We could go through the process to bifurcate,” Mayor Suarez said.

Miami-Dade Mayor Carlos Giménez agreed to the special meeting but said it’s now or never, as the project has lingered in limbo for years facing administrative appeals and litigation.

4 Responses to Coconut Grove Playhouse center stage, but garage is the star