Advertisement
The Newspaper for the Future of Miami
Connect with us:
Front Page » Business & Finance » Vendors rush motorized scooters onto Miami streets 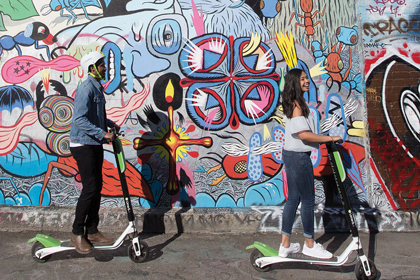 Six vendors rushed to put motorized scooters on Miami streets April 1, the beginning of the a six-month pilot scooter pilot program in the city’s District 2. The commission approved the pilot 3-2 in October, with Joe Carollo and Manolo Reyes dissenting, citing safety concerns.

The city came up with a formidable list of rules: Riders must 18 or older and have a driver’s license; can only ride the scooters on streets, or sidewalks or bike lanes; can’t have passengers or take the scooters outside of District 2; should yield to pedestrians and alert them before passing, and should wear helmets.

Bolt Mobility, based in Miami Beach, rented and is renovating a Wynwood warehouse on Northwest 24th Street that will be a maintenance and repair facility but also an employee training space as the company rolls out its service to other cities, said Will Nicholas, executive vice president of operations.

Bolt has scooters on the streets of Fort Lauderdale, and in Arlington and Alexandria, VA, with plans to expand to Atlanta, Nashville, Los Angeles and other cities, he said.

Bolt, created in 2018, aims to fill the gaps in micro-mobility and revolutionize transportation, according to its website. Usain Bolt, the Jamaican track star who’s said to the world’s fastest man, is the company’s ambassador.

Safety is the company’s chief priority, Mr. Nicholas said. The bright-yellow Bolt scooters have aluminum frames, LED front and rear lights, dual brakes, 10-inch wheels made for urban environments, and foot pads that allow the rider to attain better balance and control. In addition, there’s a feature that requires riders to locate and practice working the brakes before taking the scooter out on the street, an industry first, the company’s website said.

Due to the almost universal appeal of the scooters, Mr. Nicholas said he’s hopeful that the Miami roll-out and subsequent expansions to other cities will succeed. “This is a trend that’s sweeping the country, and being a South Florida business, we’re proud that our scooters are on the streets of Miami.”

Bird, a vendor that’s initially putting 50 scooters in Miami with the ability to grow the fleet depending on usage, is in more than 100 cities across the US, said Mackenzie Long, its spokesperson.

“Bird’s mission is to partner with cities to take cars off the road,” she said. “We’re excited to be in Miami, with its great weather.” The company also operates in Fort Lauderdale and Coral Gables, and will soon debut in Tampa.

“We also know that traffic has become burdensome, and has greatly affected our climate, so we’re hoping people will skip the short car trips” in favor of the scooters, Ms. Long said. “We’re hoping to see the proliferation of scooters as an alternative to cars,” which in turn will lead to scooter lanes, similar to or augmenting existing bike lanes.

The company has rolled out a feature, Community Mode, on its app to make it neighbor-friendly. The platform allows anyone to report to Bird a disabled scooter, one that’s blocking access, or any inconvenience associated with a scooter. “We want people to know we’re in this together with them and we want to hear about any problems,” Ms. Long said.

Lime in Florida “has been working with Miami and Commissioner [Ken] Russell since the beginning,” said Vivian Myrtetus, community affairs manager. “We’re really excited to be here. We’re also out in the community educating drivers, because this is a completely different mode of transportation. It’s not a toy.”

Lime rolled out with 50 scooters in Miami and will have 100 before the end of April, then 25% more each month is usage warrants it, Ms. Myrtetus said. The company is in Fort Lauderdale and will enter the Tampa market in mid-April.

“We don’t use off-the-shelf scooters; we design our own,” she added. “We’re all about research and development.” A new 2½-inch screen will allow riders to get information, such as directions, she said.

To make scooters available where they’re most needed, “We’re constantly rebalancing, going out during the day and moving the scooters so they’re at Metrorail stations, outside Brickell office buildings, and near where riders want them,” she said.

“We hope people will use them for fun at first, and then will realize this is a viable mode of transportation that will help them avoid traffic, parking” and other problems they would face as car commuters, she said.