Advertisement
The Newspaper for the Future of Miami
Connect with us:
Front Page » Real Estate » Town meetings set on Magic City Innovation District 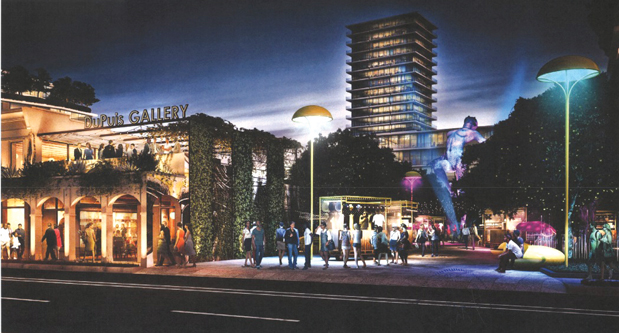 For those who didn’t get the chance to weigh in on the massive Magic City Innovation District plan for Little Haiti, two town hall meetings will be held between now and the end of June.

This additional community outreach is required of the developers, and part of conditions included in an initial approval of several zoning and land use requests of MCD Miami LLC and its affiliate co-applicants.

At a meeting that began March 28 and carried over into the next morning, Miami city commissioners voted 4 to 0 to approve the requests after a first reading. Commissioner Joe Carollo was absent when the vote was finally taken well past midnight.

The project is far from set in concrete, as the zoning and land use changes require a second and final reading and vote, tentatively set for June 27.

It was Mr. Hardemon who helped negotiate additional perks from the developer to improve the neighborhood, including a commitment to pay up to $31 million – over time – in community benefit dollars into a new Little Haiti Revitalization Trust.

The mixed-use project would transform about 37 abutting parcels in Little Haiti into a major development. The project is planned for about 17.75 acres at 6001 NE Second Ave., and the development team promises major investment and new employment opportunities for Little Haiti and surrounding neighborhoods.

MCD Miami LLC and its affiliate co-applicants are asking for approval of a Special Area Plan (SAP) and a development agreement they say will bring thousands of residential units, hotel rooms, commercial-retail and office uses to the site.

The Miami 21 zoning code says the purpose of a SAP is to allow 9 abutting acres or more to be master planned to allow greater integration of public improvements and infrastructure, and “greater flexibility so as to result in higher or specialized quality building and Streetscape design.”

One of the resolutions says: “…the SAP consists of a phased project which includes a maximum of approximately 2,630 residential dwelling units and 8,164,140 square feet of total development floor lot ratio (“FLR”) of which 370,000 square feet of FLR may only be used for parking; the SAP shall contain a minimum of 165,528 square feet of public open space; the SAP will modify the underlying transect zone regulations that are applicable to the subject parcels and where a regulation is not specifically modified by the SAP, the regulations and restrictions of the Miami 21 code will apply.”

The Magic City proposal has been controversial, and spawned numerous marathon meetings where sides have been taken.

Supporters say the project will bring much-needed employment and economic stimulus to the area. Opponents fear it will fuel gentrification and forever change the character of Little Haiti.

At the latest meeting, Mr. Hardemon was sensitive to remarks from some members of the public claiming a lack of community outreach by the developers and city officials.

Neisen Kasdin, an attorney representing the developers, reminded commissioners of the developers’ strong desire to improve and uplift the community by bringing major economic development and good jobs to the area.

“It is a job-generating project at its core and will create enormous spinoff,” he said. “We are anxious to move forward and make the best project possible.”

The attorney said the developers have had “extensive” community outreach, held four community meetings beyond several public hearings at City Hall, and met with dozens of neighborhood organizations and hundreds of residents.

Mr. Kasdin said this has gone on for nearly two years, and it’s “probably the greatest outreach” he’s witnessed on all the projects he’s been involved in.

The outreach has included developers meeting with concerned community leaders, including some who voiced opposition to the project, he added.

They’ve gotten the support and blessing from community leaders, Mr. Kasdin said, adding: “Let this tide float all the boats.”

As a condition of approving the project on first reading, Mr. Hardemon asked that the developers hold two town hall-type meetings in Little Haiti, beginning around 5 p.m. and lasting four hours maximum.

He said he wants “serious dialog” between the developers and the community. No dates have been set.

Mr. Hardemon, supported by his colleagues, also asked the developers to consider ways in which the $31 million can be paid earlier to the city, or how a payment plan spread over time would include gradual increases, related to the cost of living.

A draft of the latest development agreement between the city and developers says all of the $31 million would be have to be spent to improve Little Haiti.

That portion of the deal reads: “One hundred percent (100%) of the Community Benefit Contribution shall be restricted to use within the Little Haiti neighborhood for the development of affordable and workforce housing, community educational programs, local small business development, local workforce participation and hiring programs, the beautification of NE 2nd Avenue and other areas in Little Haiti, and/or the creation and improvement of public parks. The Community Benefit Contribution shall not be used for any other project, program or purpose.”