Advertisement
The Newspaper for the Future of Miami
Connect with us:
Front Page » Transportation » South Dade Transitway developer may be on board this year

South Dade Transitway developer may be on board this year 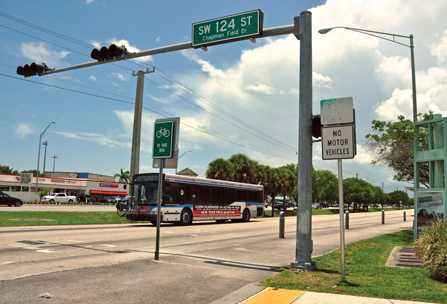 The 20-mile transitway last year became the first of six corridors targeted for upgrades to lock in a preferred rapid transit mode.

Lawmakers, leaders and stakeholders on the county’s transportation board voted 15-7 Aug. 30 for the bus solution championed by many, including Mayor Carlos Giménez, with provisions for future conversion to ground-level rail if use grows.

Ms. Levine Cava and Mr. Moss, whose districts the corridor serves, had demanded a southern rail extension and joined commissioners Audrey Edmonson, Barbara Jordan, Mr. Suarez and others voting no.

The county has committed $100 million in “half-penny” transit taxes to attract state and federal matches for the $291 million project, and in December federal overseers awarded a
$9.5 million BUILD grant for two park-and-ride facilities beside it.

Florida Department of Transportation files show Miami-Dade in October sought $97 million in federal “Small Starts” grants. The project has made it into the program but awaits funding, Ms. Bravo said. However, she said, talks are going “very well.”

“They’ve vetted a lot of our information and are working with us on a lot of parallel tracks.”

Pressed to estimate when the county will request proposals and further funding, she said the county needs a state recommendation.

“We hope to have that in… a month,” she said, after which the county would give developers “at least a couple months” to bid.

Of the five other corridors in the transit expansion plan, only the North Corridor stretching from the northernmost Metrorail station to the Broward County line has a transit mode selected: “elevated fixed guideway transit” with preference for rail, possibly a Metrorail extension.

The county will pick modes for every other corridor this year, Transportation Planning Organization Director Aileen Bouclé said, after which financing and development will be “staggered” over three years.

Though their districts didn’t get the same consideration, Mr. Moss and Ms. Levine Cava joined in unanimously choosing rail for the North Corridor in the Dec. 6 vote.

Mr. Moss this week said Ms. Bravo, Ms. Bouclé and others could expect legislation to ensure the county “creates a seamless opportunity for conversion [to rail on the South Dade Transitway] in the future.”

Assistant County Attorney Bruce Libhaber said his office is working on an item, which the two commissioners agreed to sponsor and meet again to discuss.

Mr. Moss, whose final term ends in 2020, asked that the South Corridor transit project be given “a sense of urgency – a little heat” to get it close to finished by then.

The bidding process, Ms. Bravo said, will add weight based on how quickly proposers say they can complete the job.

Future conversion to rail, she said, is “definitely something that’s being taken very seriously.”