Advertisement
The Newspaper for the Future of Miami
Connect with us:
Front Page » Top Stories » No Ferris wheel for Maurice A. Ferre Park

No Ferris wheel for Maurice A. Ferre Park 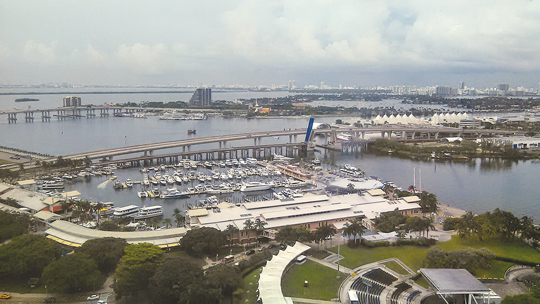 There will not be a Ferris wheel erected at Maurice A. Ferré Park on the City of Miami waterfront.

That was the clear message from city commissioners March 28.

Will city rules be changed to allow a Ferris wheel at Bayside Marketplace, a large open air mall of stores and restaurants on leased city-owned land? Maybe.

Commissioners directed the city Planning Department to go back to square one in creating a zoning exception to allow a Ferris wheel or sky wheel at Bayside.

“There was never the intent for an amusement ride in any city park,” said Commission Chairman Ken Russell, whose District 2 includes the waterfront and several large city parks.

His comment came at the start of a second reading and planned vote on a proposed zoning amendment to add “amusement ride” as a use allowed by exception with city commission approval within the Civic Space Transect Zone.

Bayside Marketplace would like to construct and operate a Ferris wheel within its property on the waterfront, on city-owned land leased to the private operator, according to Mr. Russell.

No one suggested amusement rides on public park spaces, he stressed.

“I believe green space is sacred. No park space should be developed, rented or leased. It’s for the use of our residents,” said Commissioner Manolo Reyes.

In the same way he is opposed to turning the Melreese Golf Course, on city land, into a major commercial development, he said.

“I will oppose any development in any of our parks,” said Mr. Reyes. The city is negotiating with the David Beckham group to lease the golf course site next door to Miami International Airport for a major commercial development tied to a professional soccer stadium.

Commissioners approved the amusement ride amendment preliminarily Jan. 24, after several people spoke in favor of the change, saying a sky wheel at Bayside Marketplace would be an iconic landmark.

The applicant for the zoning change was City Manager Emilio Gonzalez.

Amusement ride was defined as: “Any permanent motorized or non-motorized mechanical device which carries or conveys customers around, over, or along a fixed or restricted route or course or within a defined, on-site area for the purpose of providing enjoyment or entertainment to customers.”

Between the January and March 28 meetings, opposition grew to the proposed legislation and specifically to the plan for a Ferris wheel at Bayside.

Criticism and opposition was expressed by former mayor Maurice A. Ferré, who recently saw Museum Park – also on the waterfront – changed to Maurice A. Ferré Park in his honor.

In a March 25 letter sent to Mayor Francis Suarez and all five commissioners, the well-regarded community leader pleaded with them to protect public open spaces and parks, particularly the public lands stretching from the MacArthur Causeway south to the Miami River.

Mr. Ferré specifically opposed the proposed zoning change that would allow a Ferris wheel at Bayside Marketplace, and potentially other waterfront sites.

“This would open up all our waterfront parks to become a Miami ‘Coney Island,’” he wrote.

“My request … to all of you is to please assure that all the Bayfront parks have no possibility of becoming Miami’s Coney Island. At the very least please delete the amusement rides from the Maurice A. Ferré Park,” he wrote.

Similar words were spoken by downtown residents opposing a Ferris wheel or amusement ride, with potentially loud operations, music and bright lighting at Bayside, which abuts the city’s Bayfront Park.

Some residents expressed strong opinions in opposition to the city’s waterfront becoming an amusement park.

Planning Director Francisco Garcia said he wanted to make it abundantly clear that the proposed zoning amendment made no reference to “amusement parks,” and was written with many proposed restrictions to try to allow for a Ferris wheel at Bayside only.

Mr. Garcia told commissioners he accepted the challenge to continuing working on a way to allow the Ferris wheel at Bayside, while not opening up other properties to amusement rides.

“We will have to go back to square one,” he said.

Commissioner Keon Hardemon said he was concerned with the proposed zoning amendment’s impact on other properties, referring specifically to an expansion plan at Jungle Island approved by voters that include a zip line.

Mr. Garcia said a zip line wouldn’t be considered an amusement ride, as it’s not mechanical in nature.

The commission eventually approved a motion denying the zoning amendment, and directing the planning staff try to come up with another way to allow the Ferris wheel at Bayside.

“I want to include all city parks, all green space owned by the city. That’s a legacy to our children,” said Mr. Reyes.

“It’s a loaded issue,” she said, referring to current proposals “in the works right now.”

Mr. Russell said he’d be in favor of a resolution limited to Ferré Park, to protect it from commercial development.

Ms. Mendez was asked to draw up different proposals for protecting city parks and bring them to a future meeting.

In his letter, Mr. Ferré also voiced opposition to a plan he fears will open up more of the Biscayne Bay waterfront to major commercial development involving the FEC Slip, a former seaport docking site that fronts the south end of what is now Maurice A. Ferré Park.

A request for proposals was issued Jan. 18 by the city’s Department of Procurement, on behalf of the Bayfront Park Management Trust, which oversees Bayfront Park and Maurice A. Ferré Park.

The 39-page document requests proposals for the lease of city-owned waterfront property “for, but not limited to marina/restaurant/ship’s store uses” at Federal East Coast (FEC) Slip at Maurice A. Ferré Park, 801 Biscayne Blvd., and is also known as “FEC Slip RFP”.

Proposals are due April 18.

Mr. Ferré concluded his letter: “Since I was one of the culprits, if not the main culprit, let me plead with you to be stronger and wiser than I was, and spare the little area that we have left as green space along Biscayne Boulevard in Downtown Miami.

“Please reject these and future requests to further intrude by again improperly monetizing our beautiful series of parks along the waterfront and river of Downtown Miami.”