Advertisement
The Newspaper for the Future of Miami
Connect with us:
Front Page » Communities » Miami OKs its first legislation to protect from sea level rise 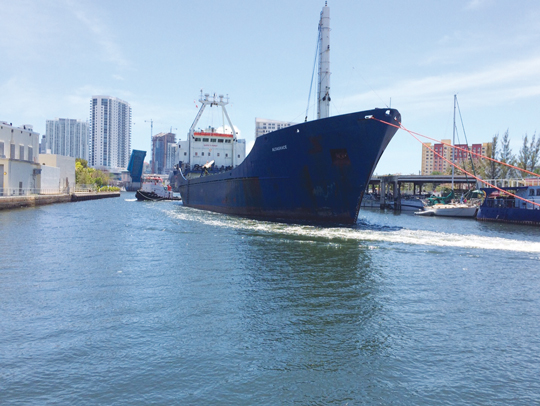 The Miami City Commission made history March 28 by approving the city’s first piece of legislation related to protections from sea level rise.

The move to add resilience methods into the Miami 21 zoning code was met with support from environmental organizations, community leaders and from residents who say the City of Miami is Ground Zero for sea level rise and climate change concerns.

City officials’ first attempt at new rules with climate change and sustainability is an ordinance allowing new construction and redevelopment to raise habitable structures out of the flood plain with added “freeboard,” up to 5 feet above the Base Flood Elevation.

The amendment will also allow additional first floor height for ground floor retail establishments so that they may better respond to potential changes to public infrastructure in response to sea level rise.

The ordinance passed on first reading in January and on final reading March 28.

Horacio Stuart Aguirre, Miami River Commission chairman, was on hand March 28 to support the ordinance changes, reminding commissioners how the city is already dealing with serious flooding during king tides and storm events.

He said the recent super moon was the latest example of flooding, particularly to vulnerable properties along the river.

Mr. Aguirre also presented the city with a letter noting the river commission voted to support the freeboard amendment to the zoning code.

“The MRC passed a resolution 12-1 recommending approval of the subject ordinance, and that the City encourage future eligible applicants to exercise their new option to include up to 5 feet of freeboard,” the letter read.

The amendment defines freeboard as the additional height above the Base Flood Elevation at which the lowest finished floor is built.

Base Flood Elevation is defined this way: The elevation of surface water resulting from a flood that has a 1% chance of equaling or exceeding that level in any given year, as determined by Federal Emergency Management Agency, or FEMA.

The zoning code had required 1 foot of freeboard, and this amendment creates the option for up to 5 feet of freeboard.

In addition, the change allows the raising of infrastructure, and the option for up to a 5-foot increase in the current height of ground floor retail, from 25 feet to 30, so that they may better respond to potential changes to public infrastructure in response to sea level rise.

The legislation notes that FEMA encourages the incorporation of freeboard into the construction and reconstruction within areas prone to flooding, with consideration of future risk due to sea level rise.

The addition of freeboard to height requirements has many benefits, it says, including reducing the amount of at-risk property from flood damage and reducing National Flood Insurance Program premiums for property owners, and increased ground-floor height allowances in flood-prone areas to provide ground-floor retail establishments the flexibility to respond to changing infrastructure needs while preserving and enhancing a quality pedestrian environment.

The legislation says 24% of the city is within the Coastal High Hazard Area (CHHA), as defined in the Miami Comprehensive Neighborhood Plan and state statutes.

The city has more than 12,000 properties within the CHHA, comprising roughly 5,716 acres.