Advertisement
The Newspaper for the Future of Miami
Connect with us:
Front Page » Education » University of Miami dorms learning sites 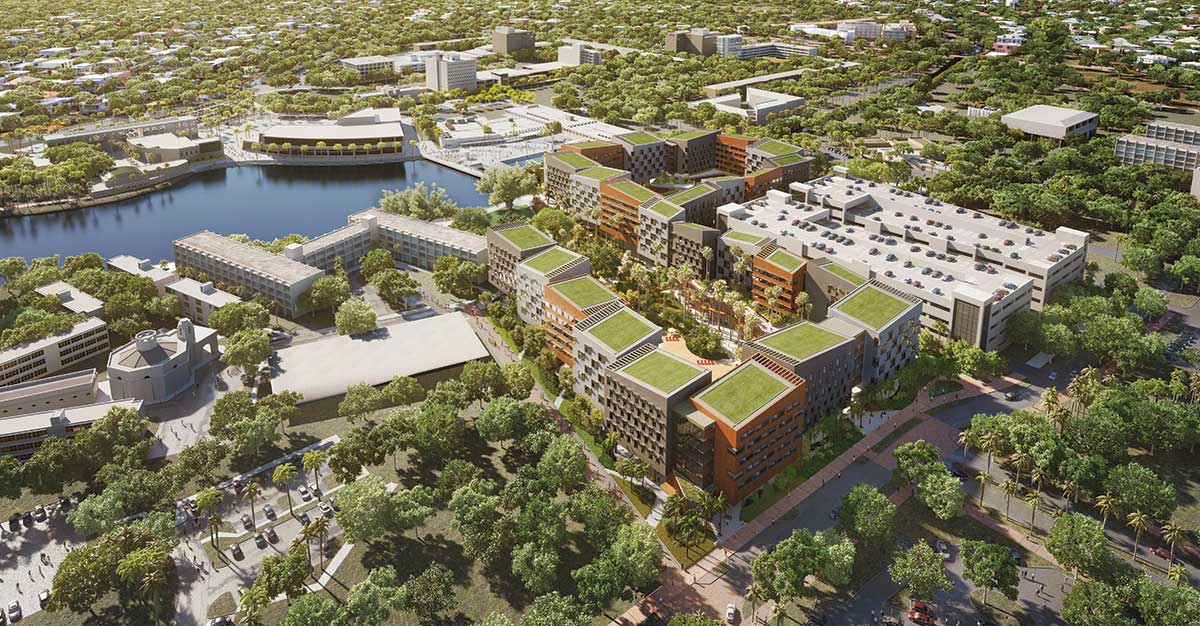 When the University of Miami administration decided to replace its 50-year-old dorms with two sleek new clusters of mixed-use buildings, the focus changed. “This isn’t just housing; it’s an extension of the learning environment,” said Jim Smart, UM’s executive director of Housing and Residential Life.

The first phase, which has no official name yet but is informally called Lakeside Village, comprises 12 acres with 25 interconnected buildings and a multitude of outdoor spaces including a grand courtyard, study spots, recreational spaces and outdoor terraces.

Each of the seven-story main buildings, designed by Arquitectonica, will have five floors of student housing for 1,115 sophomores, juniors and seniors, with the ground floor and mezzanine level of the main structure serving as event and university office spaces.

“In an effort to activate the space surrounding Lake Osceola, amenities include a large exhibition space for dynamic programming and other meeting spaces such as an auditorium, a classroom and multi-use pavilion,” a university release said.

Unit sizes range from studio to four-bedroom. It’s expected to be completed in the summer of 2020, and will cost more than $150 million.

While the first phase is intended for upper classmen, freshmen will initially live there while their current dorms are being replaced, Mr. Smart said. “It’s a little like musical chairs.”

Because it’s intended for freshmen, “Centennial Village will continue the successful first-year experience program with live-in faculty as well as professional and student staff who support and enhance the freshman experience,” the release said. “In addition to double rooms and an increased offering of single rooms for a combined total of an estimated 2,100 students (inclusive of Eaton Residential College), the new residential colleges will feature private bathrooms, kitchenettes located in shared resident lounges as well as classrooms and learning hubs. Additionally, Centennial Village will be positioned to take advantage of the many outdoor and programmatic elements of the Coral Gables campus surrounding Lake Osceola.”

Other than the Eaton dorm, each building will be nine floors tall, and offer 1,728 beds. The estimated project cost is $260 million; the architects on the project are VMDO Architects & Zyscovich Architects.

“We’ve learned a lot over 50 years,” Mr. Smart said. “We used to think of dorms as places just to sleep and study, but now we know a lot of learning, both formal and informal, goes on there. It’s really an extension of the classroom.”

The freshman spaces were designed to draw students out of their rooms and encourage them to interact with others.

“It’s better than a home away from home,” Mr. Smart said. “The fact that staff and faculty live there, too, increases their interaction. We’ve added a lot of spaces that will make adjusting to college easier. We know that as they grow up more, they want more autonomy.”

The university’s goals in transforming its residential component are to “be in a position to house as many people on campus as want to be here,” Mr. Smart said. “We want them to have a positive experience during the course of their stay with us.”

One Response to University of Miami dorms learning sites