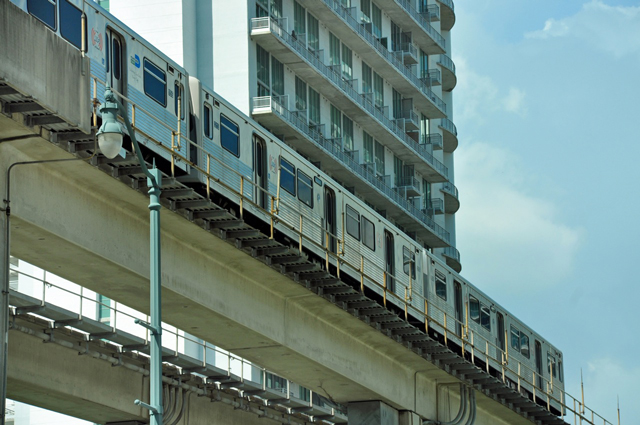 After a decade of subsidizing existing services, the surtax known as the “half-penny” this October will return to its original purpose: paying for additions, improvements and expansion of transportation, transit and infrastructure across Miami-Dade.

In a surprise move Tuesday, Commissioner Rebeca Sosa withdrew an item she’d sponsored that would have postponed unwinding half-penny dollars from the county’s general fund until 2020 and instead moved to accept a recommendation from the half-penny’s overseer, the Citizens’ Independent Transportation Trust (CITT), to do it this year.

Ninety seconds later, all 13 commissioners had voiced approval, directing Mayor Carlos Giménez’s administration to put the change in the 2019-20 budget.

Just like that, a 17-year-old promise to voters is en route to restoration after being interrupted in 2009 when commissioners, at the CITT’s urging, unified the funds to support its transit systems during the Great Recession.

“It’s a great day, a positive step forward. Now I want to see what the administration comes back with,” CITT Executive Director Javier Betancourt said. “Today we can start the process of regaining the public trust.”

County voters in 2002 approved the half-percent hike in sales taxes to fund transit improvements, including an extra 90 miles of rapid transit, a doubled Metrobus fleet, upgraded infrastructure and a free Metromover.

County officials at the time said the tax would generate about $150 million yearly and attract state and federal matching funds for big-ticket projects.

To date, the half-penny has produced about $2.7 billion. More than 20% went to cities, which launched localized circulators like trolleys.

But while the 25-cent Metromover fare died and both rail and bus fleets are slowly being replaced, only one new Metrorail stop was built, just 11% more buses were added and many Metrobus routes are now outsourced amid dipping ridership and revenue.

Instead, though detangling the funds will indeed lead to half-penny receipts being used to support half-penny projects, due to expanding project costs the general fund will begin to subsidize those projects by 2021 and cover their costs entirely by 2024, according to Management and Budget Director Jennifer Moon.

That still leaves time to use the money as intended, Mr. Betancourt said, including committing what funds are generated to attract investments in the county’s Strategic Miami Area Rapid Transit (SMART) Plan, which commissioners adopted in 2016 to expedite new rapid transit in six key county corridors.

Of those, just one corridor – “gold standard” bus rapid transit on the South Dade Transitway – has successfully secured fund commitments due to half-penny investments.

“We’re talking about freeing up tens of millions, so it’s not a magic bullet by any means,” Mr. Betancourt said. “But the more funds we can free up to put toward expansion, the better, [because] we’ll be able to leverage [those] funds to attract more state and federal funds to allow us to advance the SMART Plan, hopefully, a little more quickly.”