Advertisement
The Newspaper for the Future of Miami
Connect with us:
Front Page » Top Stories » Juggernaut mall touted to replace Miami golf course 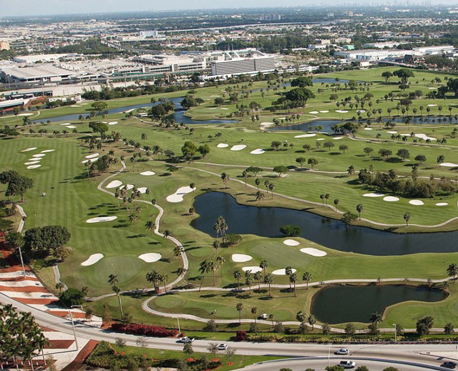 Miami Commissioner Joe Carollo is convinced a mall built beside Miami International Airport on city-owned land that today is a golf course would become one of the nation’s most successful commercial ventures and a huge financial boon to the city for decades.

Mr. Carollo’s determination that Melreese Golf Course be redeveloped was apparent after he commented on legislation to push the administration in talks with the David Beckham group that plans to make the site a commercial hub and tech campus anchored by a Major League Soccer stadium.

Commissioners told City Manager Emilio González last week to report on negotiations for the proposed ground lease at the next commission meeting and deliver a finished proposed lease for approval by Sept. 12.

“This is a one-of-a-kind site, a key location, next to the airport and expressways. We need top dollar development potential,” Mr. Carollo said. He predicted a shopping center there within a year would be one of the top producing malls in the US.

Mr. Carollo said Miami is the gateway to the Americas and visitors all shop, going to Sawgrass Mills or Aventura Mall because nothing is near the airport.

“That’s gonna be big – we need to share in that,” he said of a mall at the Melreese site.

If no deal is reached by September, he vowed to move to put the property out to the highest bidder with the best development proposal.

City voters in 2018 authorized the city to negotiate and sign a 99-year lease with Miami Freedom Park LLC for 73 acres, waiving bidding and converting Melreese Country Club to a soccer stadium; a minimum 1 million square feet of office, retail and commercial uses; and 750 hotel rooms – at no cost to the city.

Commissioner Manolo Reyes says he remains totally opposed and wants to make sure he can vote on the final lease before November’s election, in which he is running.