Advertisement
The Newspaper for the Future of Miami
Connect with us:
Front Page » Transportation » Flying electric taxi startup Lilium a Miami airports option 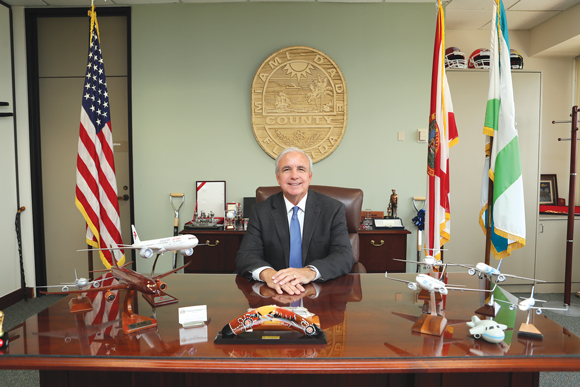 Miami-Dade Mayor Carlos Giménez has continued talks with German flying electric taxi startup Lilium, whose five-seat Lilium Jets could shuttle passengers to and from county airports within the next few years.

But while there’s mutual interest in establishing that kind of service here, Mr. Giménez says the county is keeping its options open.

“This is very preliminary talks… just to make sure Miami-Dade is on the map of this technology so as it develops [we’re] one of the places [that gets it] first and grows from there,” he said. “[But there are many] serious aerospace companies working on the same [type of] project.”

Unlike some models in development with helicopter-like propellers keeping them aloft, the Lilium Jet takes off vertically and then converts to horizontal propulsion once it reaches a specific altitude, similar to the operation of a Harrier Jump Jet.

The process saves much more energy for travel, resulting in better velocity and distance.

That model isn’t unique to Lilium, however. Embraer, a Brazilian airplane manufacturer, announced in 2017 plans to develop a similar vehicle for Uber Air, rideshare giant Uber’s venture into aerial travel set to launch in 2023.

And like Miami-Dade, Uber is playing the field as well. The company’s Uber Elevate team – whose annual Uber Elevate Summit this June will convene industry, government and tech leaders in Washington, DC – has also partnered with aircraft manufacturers Boeing and Bell, with plans for a three-city rollout by 2023.

In May 2018, Uber Head of Aviation Eric Allison told TechCrunch.com the company had over 70 companies working on electric vertical takeoff and landing vehicles to be deployed in Uber’s air taxi network.

Uber, which in May 2018 released a common reference model to encourage companies to design vehicles specifically for Uber Air, has already selected US cities Los Angeles and Dallas to debut the new service, with a third city yet to be named.

Whichever company – or companies – Miami-Dade ultimately chooses, supportive infrastructure still needs to be built to accommodate the service, including remote and on-site airport recharging stations for the vehicles, which Mr. Giménez said would be flown by fully certified pilots.

But encouraging early service and maintenance cost estimates, as well as the potential to address the county’s ongoing traffic woes, make the fast-approaching technology a win for all involved, Mr. Giménez said – provided regulators can keep up.

“This technology is outpacing the [Federal Aviation Administration, which] has to learn how to deal with this and exactly what the rules of this type of service will be in the future,” he said. “I believe this is where Lilium and other companies are right now – working on the specifics on how this would work in the airspace around cities.”