Advertisement
The Newspaper for the Future of Miami
Connect with us:
Front Page » Real Estate » Vast Little Haiti development back on Miami’s agenda 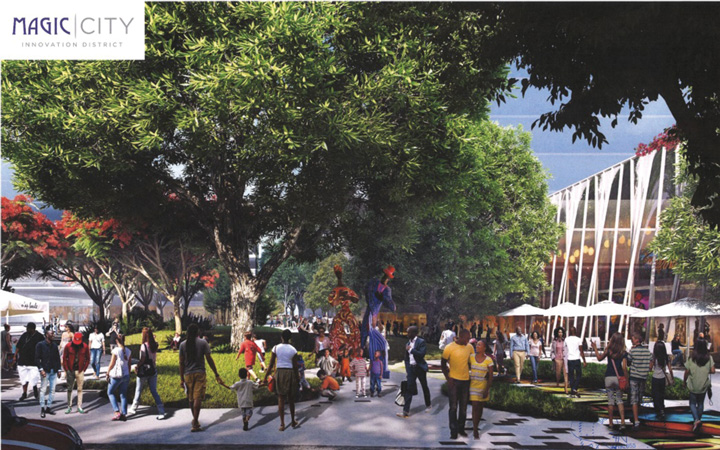 A controversial development planned for Little Haiti that has deepened the divide on the Miami City Commission is back before commissioners today (3/14).

Three planning and zoning items for the planned Magic City Innovation District are again on the commission’s agenda, after a tumultuous marathon meeting Feb. 28 ended with infighting and use of two rare procedural rules that prevented a vote.

The commission’s new chairman, District 2 Commissioner Ken Russell, invoked the so-called five-day rule. Then he abruptly invoked another procedural rule about meetings running past 10 p.m. and said the meeting was over. It was about 12:20 a.m. and he left the dais.

Commissioner Keon Hardemon wanted to vote on the items, after the hours-long public hearing, and after he’d successfully negotiated a sizeable financial contribution from the developer.

A new development agreement shows MCD Miami LLC and its affiliate co-applicants have committed to make cash contributions of $31 million into an as yet to be approved trust for providing community benefits in Little Haiti.

Mr. Russell shut down the meeting with the five-day rule, which basically allows a commissioner to call for an end to discussion on any item or document that wasn’t provided to commissioners at least five days before a meeting.

The mixed-use project would transform about 37 abutting parcels in Little Haiti into a major development called Magic City Innovation District.

The developers are asking for approval of a Special Area Plan and a development agreement they say will bring thousands of residential units, hotel rooms, nearly 350,000 square feet of commercial-retail uses and more than 1.9 million square feet of office uses to the site.

The project is planned for about 17.75 acres at 6001 NE Second Ave., and the development team promises major investment and new employment opportunities for Little Haiti and surrounding neighborhoods.

The issue was deferred to February at the end of a Nov. 15, 2018, commission meeting, after a long hearing at which many residents spoke for and against the project.

At the November meeting, some commissioners voiced concerns about the proposed height of the tallest planned structures, the inclusion of affordable housing, and the impact on the community.

Feb. 28’s meeting saw another round of public comment with sizeable numbers on both sides of the issue. Some residents support the Magic City Innovation District, believing it will bring much needed employment and economic stimulus to the area. Others oppose the project, fearing it will fuel gentrification and forever change the character of Little Haiti.

The large project would rise in phases as part of a Special Area Plan (SAP) under the city’s Miami 21 zoning code.

Attorney Neisen Kasdin represents the developers. In paperwork submitted to the city, he has boasted that the project will be “a unique and unparalleled mixed-use campus focused on local entrepreneurship and innovation in technology, the arts and entertainment, sustainability and resiliency and health and wellness.”

The Magic City SAP includes a development program to create an integrated urban campus of residential, commercial, office, research and entertainment uses built around a grand pedestrian promenade civic space at the center, he said.

Site plans show the highest proposed building would reach about 25 stories in the center of the property, with shorter heights of new development extending outward from the center.

The developer has promised to take all reasonably necessary steps to ensure preservation of the historically designated DuPuis Medical Office & Drugstore building at 6041 NE Second Ave.

The project was recommended for approval, with conditions, in July 2018 by the city’s Urban Development Review Board and later by the Planning, Zoning and Appeals Board.

The new proposed Little Haiti Community Revitalization Trust is listed in the latest draft of the proposed development agreement under community benefits.

It reads, in part: “The City shall, no later than ninety (90) days from the date of final and unappealable approval of the SAP, establish a new community revitalization trust fund … to collect and maintain specified cash contributions by the Developer … for the purpose of providing community benefits in Little Haiti.”

The developer would be required to contribute up to $31 million to the Little Haiti Community Revitalization Trust.

It continues: “One hundred percent (100%) of the Community Benefit Contribution shall be restricted to use within the Little Haiti neighborhood for the development of affordable and workforce housing, community educational programs, local small business development, local workforce participation and hiring programs, the beautification of NE 2nd Avenue and other areas in Little Haiti, and/or the creation and improvement of public parks. The Community Benefit Contribution shall not be used for any other project, program or purpose.”