Advertisement
The Newspaper for the Future of Miami
Connect with us:
Front Page » Education » New Barry University president seeks to boost enrollment 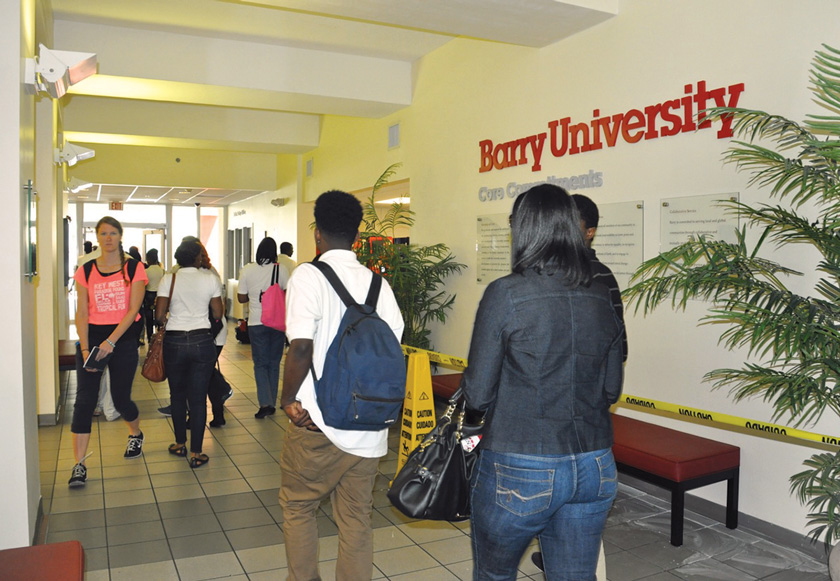 When he takes over July 1 from Sister Linda Bevilacqua, who is retiring after 15 years as president, his priority will be “first and foremost to focus on our mission, the Dominican values that anchor us,” Dr. Allen told Miami Today. Those values are to learn, reflect, and serve, he explained.

“Then it pivots to the business side of running a university,” which in this case means enrollment, retention and philanthropy, he said.

“We want to expand locally and internationally our efforts to increase the yield of students who are interested in us, then retain them. We have an excellent track records of offering students a value proposition, both academically and outside the classroom. We want them to be happy with their experience, stay with us, graduate and get great jobs.”

It’s too early for a concrete goal to be established for the fund-raising effort, he said, but not for a strategy. “We have tens of thousands of alumni and friends of the university, both locally and throughout the country. We’re going to call on them soon and often; we really need their help and hope they’ll engage with us.”

No changes in the academic program are planned, at least for now, he said. “A Barry education has great value not only because our students get great jobs, which they do. What separates Barry is values, virtues and viewpoints. Our political science majors become social workers who support immigrants’ rights and lawyers who fight against climate change. Our graduates are equipped to change the world.”

Dr. Allen also said he hopes to continue and extend the Miami Shores-based university’s outreach programs to the surrounding communities.

He is the first man and first lay person to lead Barry University since its founding as a women’s college in 1940. “Sister Linda and her predecessors led with great ideas and innovation,” he said. “I value what they’ve done and will carry their ideals forward.”

Dr. Allen’s last post was as vice president for student affairs at The Catholic University of America in Washington, DC. He is in the process of relocating his family to South Florida, he said.

At The Catholic University of America, he coordinated an integrated planning effort that led to the anticipated construction of about $90 million in capital facility investments, chaired the University Retention Committee, and “led a collaborative effort to significantly bolster student retention from matriculation through graduation,” a Barry University release said. “Specifically, undergraduate student retention rates have risen to the highest levels in the university’s recorded history.”

He also worked to secure several multi-million-dollar donations for support of capital projects and initiatives, and launched a new Center for Cultural Engagement in 2016 to support the recruitment and engagement of underrepresented minority students, the release said.

Prior to his role as vice president of student affairs, Dr. Allen served eight years as associate vice president and director of athletics at Catholic University. “During this time, [the university’s] student-athletes excelled academically and athletically, with 24 teams winning conference championships and multiple teams advancing deep into the NCAA tournament,” the Barry release said. “He also worked in various roles designing and implementing academic support programs for students at Florida Atlantic University and the University of Connecticut between 1993 and 2005.

Dr. Allen holds a Bachelor of Arts degree from Trinity College, and a Master of Arts and doctoral degree from the School of Education at the University of Connecticut, where his dissertation and research focused on the academic socialization and personal development of intercollegiate student-athletes, the release said.