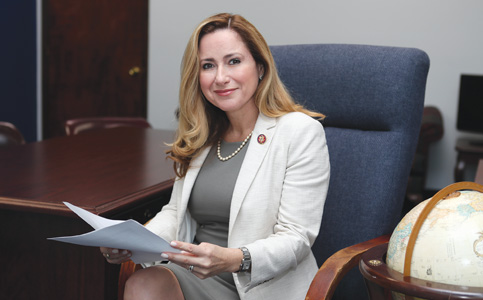 Following an unsuccessful 2016 run for the Florida Senate, the former associate dean of Florida International University’s Wertheim College of Medicine launched a second and successful campaign to represent the state’s 26th district in the US House of Representatives.

But although she’d earned degrees in political science and volunteered in two presidential campaigns, she said her interest in elected service came not from a desire for influence but rather her frustration with political complacency.

“I always felt comfortable behind the scenes, [but] I realized a lot of elected officials are not there for the right reasons,” she said. “I saw, year after year, funding cuts for education, healthcare becoming more expensive and access… becoming more limited.”

Her win, which unseated a two-time incumbent, marked the first time an Ecuadorian-born person was elected to Congress, as well as the first time a woman represented the district, which encompasses Miami-Dade’s southern tip and Monroe County.

“I knew that no matter what I decided to do after I lost that state run, I would be committed to helping the families living in this district,” she said. “I [saw] how my previous representative of District 26 was voting, [whether] he was going to look out for us. And he wasn’t. Because of that need, I decided to [run].”

Ms. Mucarsel-Powell sat down with Miami Today reporter Jesse Scheckner. The interview, recorded by Jahmoukie Dayle, can be found Friday at https://bit.ly/2UdTyGr.