Advertisement
The Newspaper for the Future of Miami
Connect with us:
Front Page » Real Estate » Commissioner probes details of David Beckham group deal 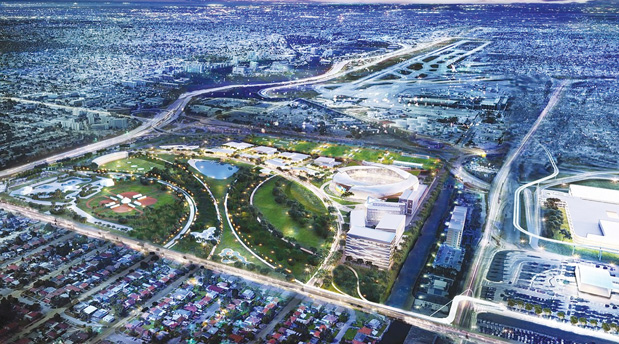 Miami Commissioner Manolo Reyes wants a status report from administrators on their negotiations with the David Beckham group for a long-term lease of a city-owned golf course adjacent to Miami International Airport.

Mr. Reyes also wants to be able to vote on the lease before the November election, in which he will be running to keep his position.

These desires are woven into a proposed resolution on today’s commission agenda (3/14).

An approved lease would clear the way for Mr. Beckham and partners to build a Major League Soccer stadium on what today is Melreese Golf Course, along with a large mixed-use commercial development called Miami Freedom Park.

The status report – or a resolution formally requiring a report – was supposed to be delivered to the commission Feb. 28, but controversial zoning cases extended the day meeting into evening and it went off the rails after midnight, leaving several regular agenda items in limbo.

In November 2018, city voters approved a ballot proposal authorizing the city to negotiate and execute a 99-year lease with Miami Freedom Park LLC for about 73 acres of city land, waiving bidding and converting Melreese Country Club, 1400 NW 37th Ave., to a soccer stadium; a minimum 1 million square feet of office, retail and commercial uses; and a minimum 750 hotel rooms – at no cost to the city.

The ballot language also requires a living wage for on-site employees; $3,577,365 minimum annual rent; and $20 million for a 58-acre public park or other green space.

Mr. Reyes, one of two ‘no’ votes last July to place the deal on the 2018 ballot, brought up the Melreese site at the Feb. 14 meeting. He was hoping to force the hand of City Manager Emilio González, ordering him to bring the final proposed lease to a commission vote before November’s election.

The two commissioners who voted against placing the deal on the 2018 ballot were Mr. Reyes and Wifredo “Willy” Gort. Mr. Reyes is up for re-election this fall and Mr. Gort is term limited, so someone else will represent his district. Mr. Reyes wants a vote on a final lease before the fall election, while he and Mr. Gort remain on the commission.

Without a vote, commissioners directed Mr. González to report on the status of lease negotiations, along with a call for a lease before the fall election and a request that no outside consultants be hired without commission approval.

Those items are now written into one resolution which, if approved, would direct the manager to report “on the current status of the negotiations for the proposed ground lease and master development agreement between the City of Miami and Miami Freedom Park LLC, for approximately 73 acres of city-owned property … at the next city commission meeting.”

The resolution also directs the city manager “to present any negotiated lease for review, consideration, and approval by the Miami City Commission prior to the November 2019 General Municipal Elections;” and further instructs the city manager and city administration that “no outside consultants, law firms, real estate appraisal or brokerage firms, or similar consultant shall be retained without first securing city commission approval in each such instance.”

The resolution is sponsored by Mr. Reyes and Commissioner Joe Carollo.

When Mr. Reyes first brought up the Miami Freedom Park development, he said he wanted a commitment that the lease would come to the commission before this November’s election.

He said then, “I am up for re-election. Those in favor [of the deal] may use as a tactic: ‘Let’s wait and get this guy out.’”

The proposed resolution says the city aims to provide residents, visitors, and guests with all expected municipal services as well as the opportunity to engage in recreational, sporting and hobbyist activities through the provision of facilities for those activities.

It goes on to say that Miami Freedom Park LLC wants to design and develop 73 of the acres “for the purposes of constructing a soccer stadium, public park, technology hub, art and entertainment spaces, food and beverage venues, and a hotel and conference center with ancillary commercial uses.”

The resolution concludes: “… in the interests of public transparency, public information, public engagement, and a careful stewardship of the public resources such as this very important Site, the City Commission passes this Resolution issuing certain directives and restrictions relative to the proposed development of the site.”

It then sets out the three directives to the city manager.