Advertisement
The Newspaper for the Future of Miami
Connect with us:
Front Page » Business & Finance » Cocowalk’s transformation rolling forward 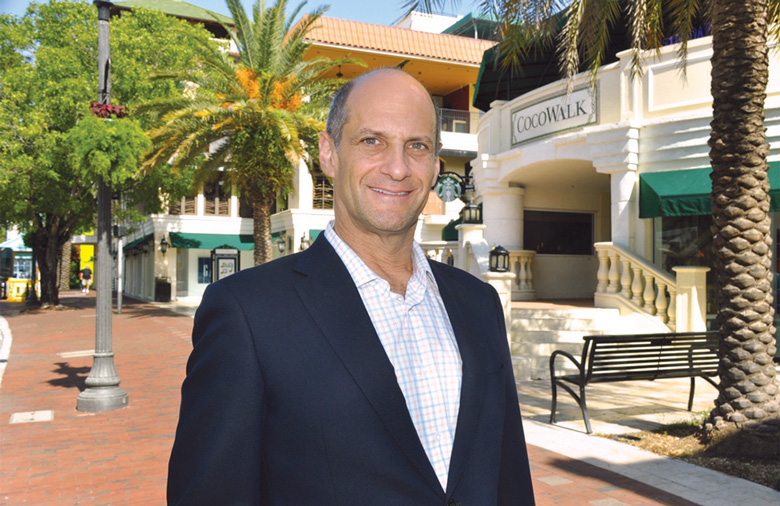 Visionaries behind CocoWalk’s transformation say they are on track to debut the outdoor mall in the spring of 2020 as construction continues and tenant leases prove to be fruitful.

The development team – the Comras Co., Grass River Property and Federal Realty Investment Trust – are adapting the 29-year-old center for the uses of residents and visitors.

They are swapping the Mediterranean-inspired architecture for a sleek take including an exposed plaza, underdeck roof wood paneling, and foliage dripping over every rooftop and terrace.

President of the Comras Co. Michael Comras says the project balances both retail and office space given the scale tilted towards retail for so long. The prior layout catered to the party scene and leisure lifestyle that beckoned the public 20 to 30 years ago, he says.

Now, Mr. Comras adds, the renovated CocoWalk will fulfill everybody’s daily lifestyle: “By creating a mixed-used environment, we are working to create uses that satisfy the daytime workers as well as the people who come into the Grove. We have fitness, Cinépolis is beginning their interior improvements and will open at the same time we do, and have a ton of boutiques catering to the lifestyle of the people that work and live in the Grove.”

Construction is divided into two phases. Grass River Property Principal Thomas Roth says phase one is complete with the exception of a few final touches. The west end, concentrating on retail and restaurants, bares a new elevator, façade, and stairway.

More additions will come after his team completes phase two on the right-hand side as well as the plaza. Finishing additions include a pop-out space on the second floor spanning out from the former home of the Cheesecake Factory and ornamentations such as a gate with butterflies and new signage.

Phase two involves the demolition of the plaza and vertical construction of the five-story One CocoWalk, primarily offering office space. The team is currently working on the second floor.

Leases are being signed as construction unfolds. Co-working Amsterdam-based Spaces looks forward to opening its third location in South Florida at One CocoWalk. The anchor tenant comes with experience managing 160 co-working offices in over 80 countries. Spaces will use 42,883 square feet – 2,029 on the first floor and 40,854 on the second and third.

Other companies are joining Spaces. Mr. Roth said, “We have proposals going back and forth with a number of different tenants right now. They are going to be great additions to Coconut Grove and the building, with industries like financial and professional services.”

Television judge on “Top Chef” Mexico Aquiles Chávez gives developers another reason to celebrate. Mr. Chávez is bringing Los Generales Mezcal & Grill to the retail component of CocoWalk, filling 7,500 square feet. Customers can sip a beverage at what developers say will be the biggest mezcal bar in the nation before sampling bone marrow tacos, duck tamales, grasshopper guacamole or a fresh take on the Mexican street food staple esquites given a touch of truffle.

The restaurant is to open later this year with indoor dining and a rooftop terrace and bar.

The construction team expects to first complete work on One CocoWalk and the plaza. They will then turn their attention to the west end at the start of 2020 to add final touches.

Developers foresee a debut of a completed CocoWalk in spring 2020.