Advertisement
The Newspaper for the Future of Miami
Connect with us:
Front Page » Communities » Miami OKs deal for lighted park under I-395

Miami OKs deal for lighted park under I-395 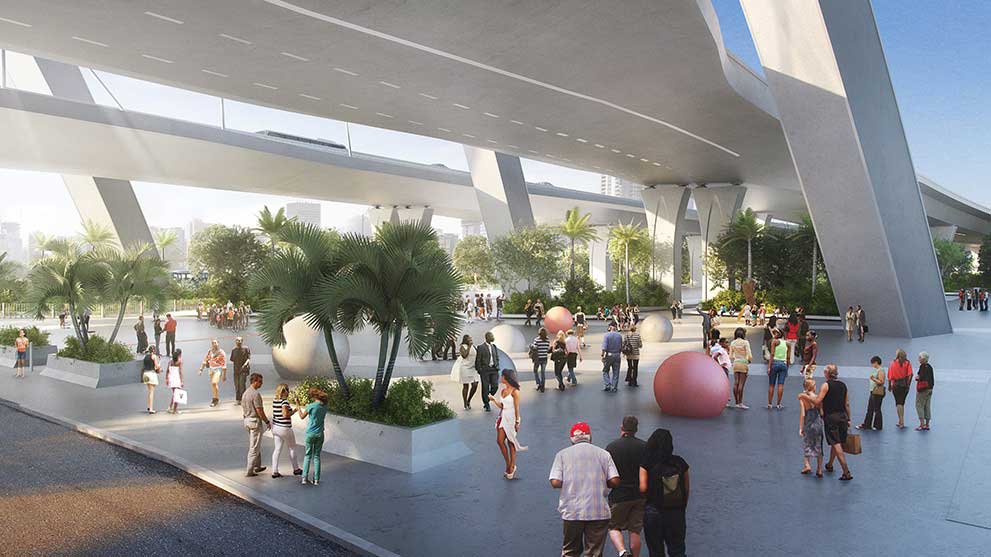 Miami city commissioners have approved the first step of a deal with the Florida Department of Transportation (FDOT) to help design and manage several blocks of land under a rebuilt I-395 freeway downtown.

Last fall, FDOT’s James Wolfe met with commissioners and announced the start of construction on the long-awaited I-395/SR 836/I-95 project, including a “signature bridge” near the Adrienne Arsht Center for the Performing Arts.

Mr. Wolfe said the transportation department was looking to the city to develop and run a 30-acre illuminated park under a rebuilt and elevated I-395 and the new bridge.

Last week, commissioners unanimously authorized City Manager Emilio Gonzalez to make a deal with FDOT “for the City of Miami to collaborate in the development and coordination of the I-395 Heritage Trail/Signature Bridge Underdeck Project” along I-395/State Road 836 between Northwest Third Avenue and Biscayne Bay.

The accord timetables when the city will give FDOT a conceptual design and a maintenance and operations plan. It also lays out a working relationship and understanding of roles, and prepares for more agreements to come.

Mayor Francis Suarez supports the plan. “All world-class cities have pride in their public spaces – they improve quality of life,” he said.

There is “no better space” for new and improved public open spaces than the land along the path of I-395, as it dissects the downtown from a burgeoning arts and entertainment district and serves as a gateway to Miami Beach, the mayor said.

And he mentioned the focal point: “The beautiful bridge design creates something very special.”

An added benefit to an improved freeway is the plan to reconnect areas to downtown, including Overtown, Edgewater and the Omni neighborhood.

The resolution notes that FDOT controls I-395/State Road 836 and “will plan, design, and construct the I-395 Signature Bridge, the community enhancements below I-395 (Underdeck Enhancements), and highway capacity improvements which are intended to improve mobility and safety in the surrounding area.” FDOT is to construct the Underdeck based on city-provided designs, it says.

The agreement mentions goals of the project, including moneymaking aspects.

“The Parties intend to create an active environment … [and] possess a mutual understanding the Underdeck should be planned and designed in a manner that allows for revenue-generating opportunities, in order to fund operations and maintenance of the Underdeck,” the agreement reads.

The parties plan “subsequent agreements relating to Underdeck, including… a Development Agreement; the Department’s lease of the Underdeck property to the City; and, an Underdeck Operations and Maintenance Agreement,” it reads.

The $802 million project is funded by the state transportation department ($616 million) and the Miami-Dade Expressway Authority ($186 million).