Advertisement
The Newspaper for the Future of Miami
Connect with us:
Front Page » Healthcare » Miami clears way for Jackson Memorial Hospital rehab center 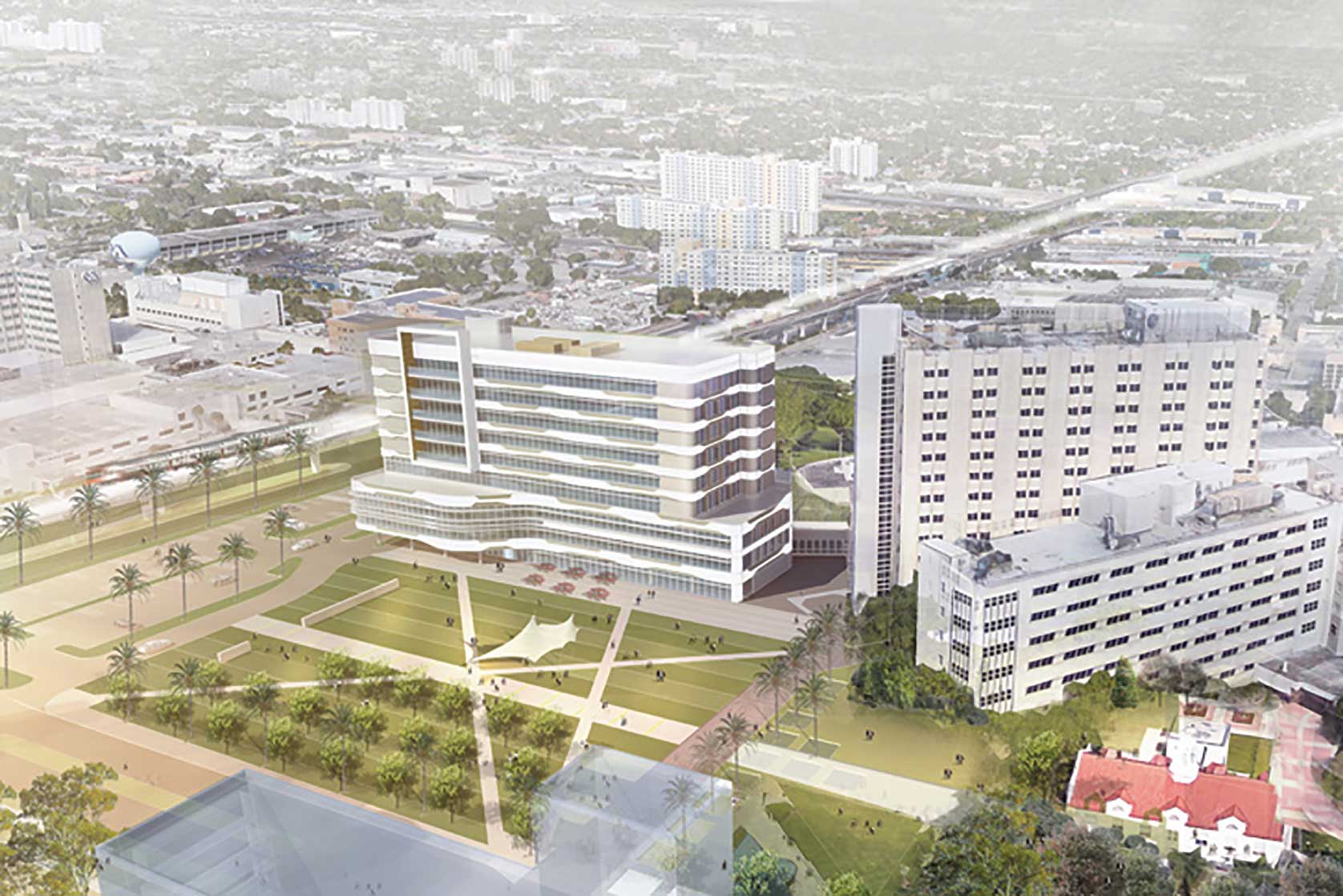 The Jackson Memorial Hospital campus in the Health District of Miami continues to grow and evolve.

In order to accommodate changes there, the City of Miami needed to allow a replatting of the property. Action came Feb. 28, as commissioners authorized the city manager to execute a memorandum of understanding between the Public Health Trust of Miami-Dade County and the City of Miami.

The trust is a county agency that governs and runs Jackson Memorial Hospital and other facilities.

Jackson Health System is in the midst of investing more than $1.7 billion for renovations, new facilities and the latest technology.

Major activity at the Health District site dates back to February 2018 when demolition of older buildings began at 1611 NW 12th Ave., to clear the way for a state-of-the-art rehabilitation center.

That address is referenced in the city’s recent legislation, showing the location of the new rehab center to be northeast of Northwest 12th Avenue and Northwest 16th Street, where 16th meets Northwest 11th Avenue.

Jackson officials say the Christine E. Lynn Rehabilitation Center for The Miami Project to Cure Paralysis at UHealth/Jackson Memorial Medical Center will be one of the world’s premiere rehabilitation hospitals.

Mayor Francis Suarez spoke in favor of the resolution to clear the way for replatting at Jackson.

Mr. Suarez praised Jackson as one of the most impressive public health centers in the nation, noting how the trust is investing in the area’s high quality of life.

A background memo says the Public Health Trust has numerous projects ongoing within the Jackson Memorial Hospital property, and the projects require that the underlying property be re-platted.

Miami-Dade County owns a proposed plat of a subdivision to be known as “Jackson Memorial Medical Center” at 1611 NW 12th Avenue, the resolution says.

The trust and the city seek to comply with Section 55-12 of the city code by constructing improvements described in the memorandum of understanding.

The resolution notes that on April 18, 2017, the county commission authorized the trust to seek approval of the replat, including authorizing the president of the trust to take any actions necessary to accomplish the replatting.

At a cost of about $175 million, construction on the rehabilitation center is expected to be completed in 2020. Turner Construction Co. is leading the project.

Adult and pediatric patients with spinal cord injuries and traumatic brain injuries will benefit from the 250,000-square-foot facility, which will include indoor and outdoor spaces for patients; patient “apartments” where patients and caregivers can practice new, safe skills before returning home (such as how to lift your loved one from the bath, navigate household hazards, etc.); and many other innovative features.

Academic and conference spaces; a fitness center and meditation rooms; and research, diagnostic, and treatment areas are also being planned.

Jackson’s rehabilitation services are already considered among the best in the nation, and this new facility will measure up to the quality of care that has long been provided at Jackson, according to hospital officials. It will also unite the clinical and research work done with the University of Miami, as well as the development and community support of The Miami Project to Cure Paralysis.

The facility, modeled after leading rehabilitation centers, will encompass comprehensive inpatient and outpatient rehabilitation services. The 100-bed, private-room facility will offer an exemplary inpatient experience for those dealing with some of the most challenging injuries, officials said.

The center will also be near the necessary rehabilitation that accompanies the multiple clinical trials for those dealing with life-altering spinal cord and brain injuries currently led by Miami Project researchers at the medical center.

Christine E. Lynn, whose $25 million donation helped spearhead fundraising for the center, was on hand to ceremonially break ground on the building in 2015.

The remaining funds to build the center are to come from a designated portion of the $830 million general obligation bond program that Miami-Dade voters approved in 2013 to upgrade Jackson’s infrastructure and build new facilities.