Advertisement
The Newspaper for the Future of Miami
Connect with us:
Front Page » Profile » Audrey Edmonson: Chairwoman puts transportation, housing on priority list 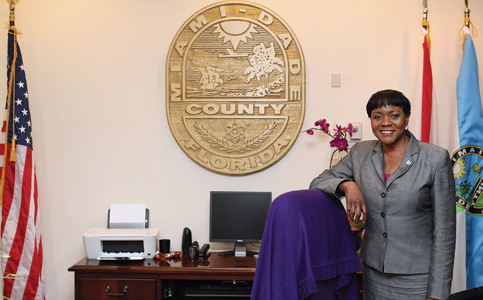 Believe it or not, Audrey Edmonson initially had little interest in politics. It took coaxing to get the Miami native to make her first run for public office more than 20 years ago. But the thrice-elected former El Portal mayor and current chairwoman of the Miami-Dade County Commission proved more than up to the task.

Today, she is positioned better than ever before to leave a legislative legacy across a spectrum of issues – including transportation, crime, gun violence, public housing, sea level rise, opioid abuse and preserving public land – before her term’s 2020 completion.

And she’s not wasting time, starting commission meetings on-schedule and concluding them by late lunchtime – a change to prior proceedings, she said, wholly intentional.

“I’ve learned how to bundle,” she said, laughing. “My intent is to start the meetings on time. It’s disrespectful for us to have our constituency waiting for us to start the meetings and get to them. Sometimes they can be there from 9:30 a.m. waiting until 3 or 4 p.m. I’m trying to decrease the time a constituent [has] to sit in the chambers waiting for their time to [speak].”

On Tuesday, several weeks after she participated in this interview, commissioners passed the first two of many items Ms. Edmonson is planning to sponsor with those constituents in mind preserving the land behind AmericanAirlines Arena as undeveloped public land and limiting potential private construction on public waterfront property.

“A lot of people don’t realize that property belongs to the people, and therefore the people should be allowed to use it,” she said. “It doesn’t belong to any particular group. It needs to be enjoyed by all.”

Ms. Edmonson, whose District 3 encompasses more than 10 Miami neighborhoods and the villages of El Portal and Miami Shores, sat down with Miami Today reporter Jesse Scheckner. The interview, recorded by Jahmoukie Dayle, can be found Friday at https://bit.ly/2UdTyGr.