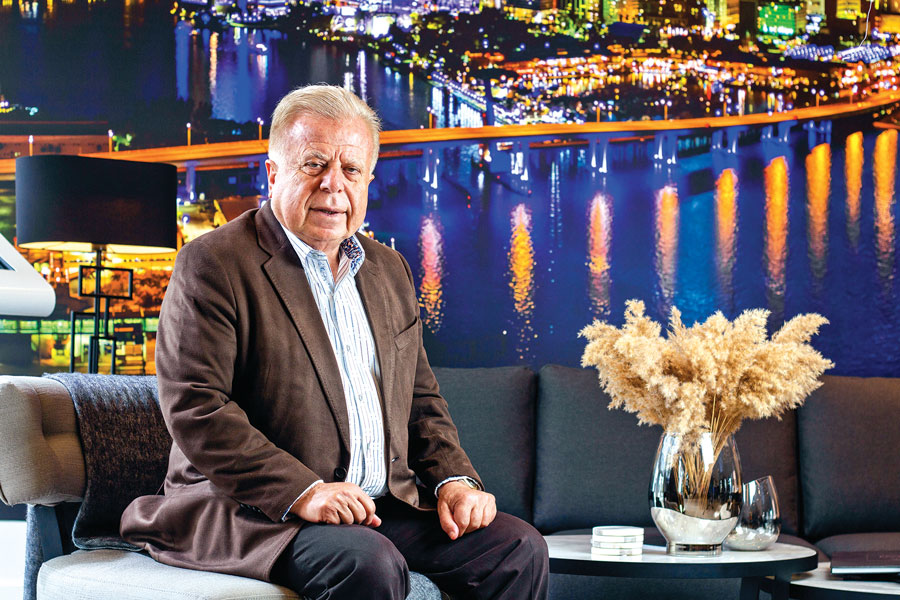 The Okan Tower team is awaiting a final state OK on condominium documents, expected in the spring, and plans to break ground this year on a 70-story downtown mixed-use tower.

The project is to rise at 555 N Miami Ave., where it will promise buyers a slice of what the developers say will become the tallest building in Florida, with a cap at 890 feet – taller even than Brickell’s new Panorama Tower, now the state’s tallest.

Plans include 70 stories with amenities, a hotel, condo-hotel units, condos, and 64,000 square feet of office spaces.

The design by Behar Font & Partners resembles a tulip, a nod to the national flower of Turkey, the homeland of the project’s developer, Bekir Okan. Mr. Okan has built an empire in his native country as a developer and plans to foot Okan Tower’s $300 million bill.

The Okan Tower will be the company’s first US development project. The city selection process for the stateside first came easy.

Okan Group Chairman Mr. Okan said by email, “I have been traveling to South Florida for several years, with two of my children attending university there, and I’ve always associated the city with fond memories. Miami is a global destination, adored by people around the world for its vibrant energy and cultural diversity. When exploring locations for our first US development, the decision to choose Miami was simple and immediate.”

The Okan Tower offers residents and guests a variety of amenities, some of which take inspiration from the developer’s homeland. The hammam, or Turkish bath, at the full-service spa is one example. A cigar room, co-working spaces, event room, gym, kids’ club, resident movie theater, restaurants, three swimming pools, and private owners’ wine cellar are also offered to buyers.

A Hilton Hotels and Resorts will be under the same roof as the condo-hotels and condo residences. The hotel offers 293 suites. Exclusivity and privacy are to be maintained between hotel, office, and residential users with different access points and elevators. Residents can only gain from this partnership given they have a full-service spa and room service at arm’s length, says the executive vice president of ONE Sotheby’s International Realty, Fernando de Nuñez y Lugones, which is marketing the residences.

The sales team says it has 20% of condo-hotels and condo residences reserved. The 236 condo-hotel units come furnished and range from studio sizes at 447 square feet to two bedrooms at 1,245 square feet. These homes start on the 36th floor.

Condos total 149 and scale larger than the condo hotel units, from one bedroom at 698 square feet up to three bedrooms and a den at 2,071 square feet. The duplex-style penthouses start at the 51st floor and are as cozy as 1,873 square feet to as large as 2,142-plus square feet.

Homes share a few traits in common, including ten-foot ceilings, European cabinetry in the kitchens and bathrooms, and Smart Home technology. Prices start at $360,000.

The sales team is seeing a four-to-one ratio in popularity of the condo-hotel units versus Sky residences, Mr. de Nuñez y Lugones said.

“Anyone that wants to buy something here being a foreign national, they have the dual purpose of using it as their second home and as a rental, generating income as an investment,” he said. “They are eager to do so, especially because they are generating income in US dollars.”

Foreigners comprise the majority of sales. Many come from Argentina, Brazil, Colombia, Mexico, and Turkey, he said. Payments total 50% and installments span two and half to three years: 10% at the reservation, 10% at the contract, another 20% at the groundbreaking, and a final 10% at the topping off of the building.

The fact that a large number of reservations are from Turkey comes as no surprise to Mr. Okan. He writes, “Not only is the Okan brand well-established in the country, but we also have an expansive sales gallery in Istanbul with a complete model residence, which has drawn immense interest.”

Mr. de Nuñez y Lugones said he expects sales of Sky Residences to pick up traction closer to the completion date, since most will be used as primary residences.

The Okan Group awaits Tallahassee’s approval before moving forward on construction, but permitting already in hand.

Mr. Okan writes, “We recently announced that we will be converting all reservations to contracts early this spring. This is a momentous step in the project’s cycle and further solidifies our buyers’ excitement in owning a piece of Okan Tower, which is set to become a beacon in the skyline.”